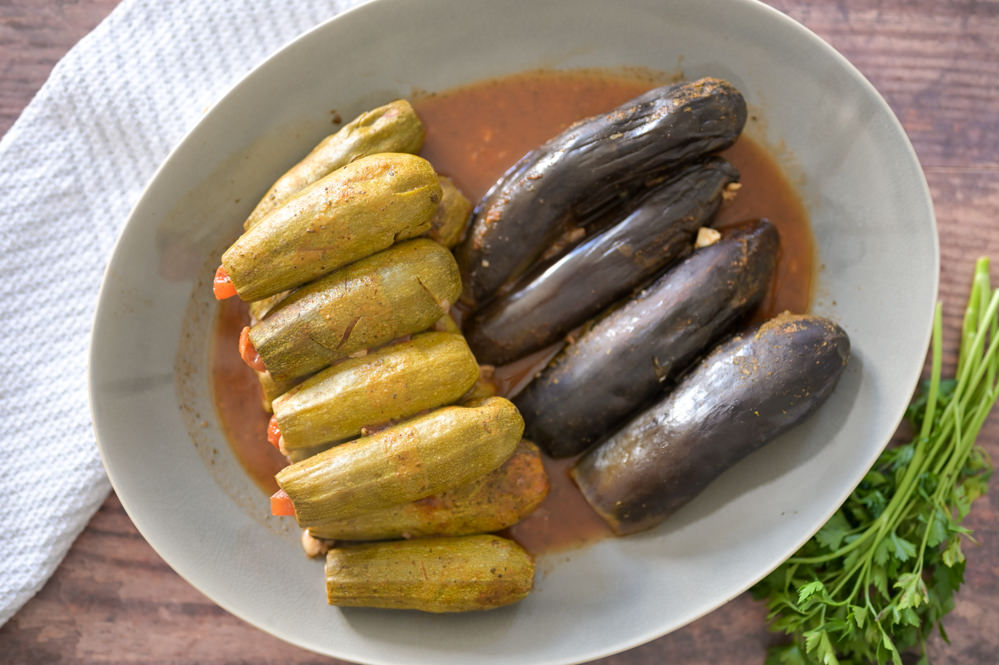 Throughout the Middle-East, there are so many different varieties of rice and meat stuffed vegetables. One of the most popular ones in Lebanese cuisine is Koosa Mahshi. Koosa Mahshi literally translates to stuffed zucchini. More often than not, eggplants are also stuffed alongside the koosa (zucchini).

This dish might seem heavy, but is actually light, and healthy. Little to no oil or butter is used in this recipe. While this dish is traditionally made with ground beef or lamb, it can easily be made vegan by omitting the meat. 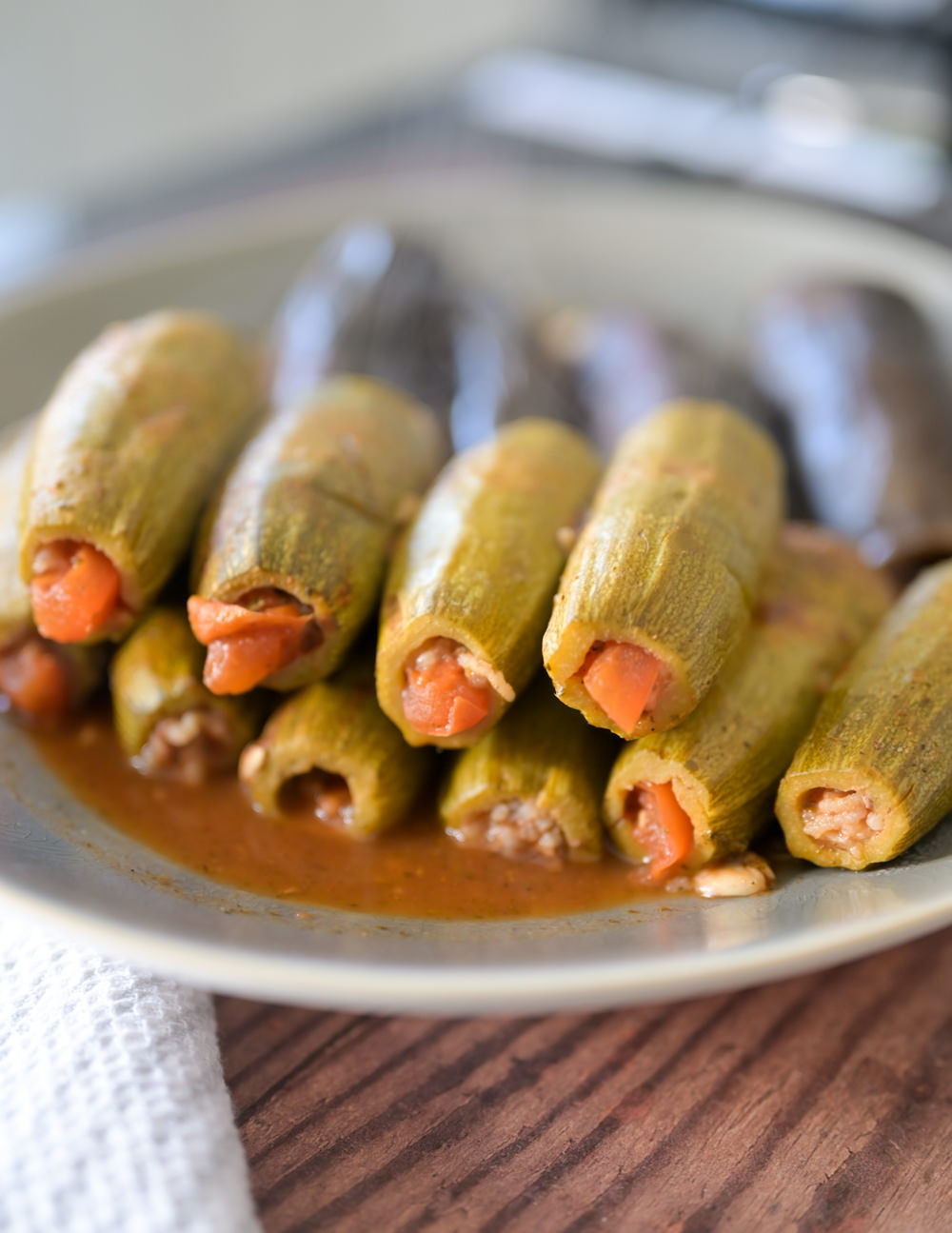 The eggplant and squash are stuffed with the same filling of seasoned rice and ground beef or lamb known as “hashweh”. They are then cooked together in the same pot in a light tomato based sauce. Hashweh is incredibly popular in Middle-Eastern recipes such as in Stuffed Grape Leaves. If you are not a fan of zucchini or the eggplant, you can make this dish with only one or the other. For this recipe, you will need a total of about 5lb of squash and eggplant combined.

Types of Zucchini and Eggplants to Stuff

The squash most often sold and used in this recipe in Lebanon is light green and smaller in size than the typical American dark green zucchini. This zucchini is known as “Mexican squash” or “gray squash”. It honestly took me a while to find them locally, since my Middle-Eastern grocer does not sell produce. A lot of farmers’ markets sell them too, especially in the summer. Sometimes they are also called ‘Calabaza Squash’.

However, using this type of zucchini is not required to make this dish, you can definitely use whatever small squash you find! Same goes with the eggplant, however, do try to steer clear of eggplants with the tougher skins, such as the large American varieties since you are cooking and eating the skin of the eggplant in this recipe. 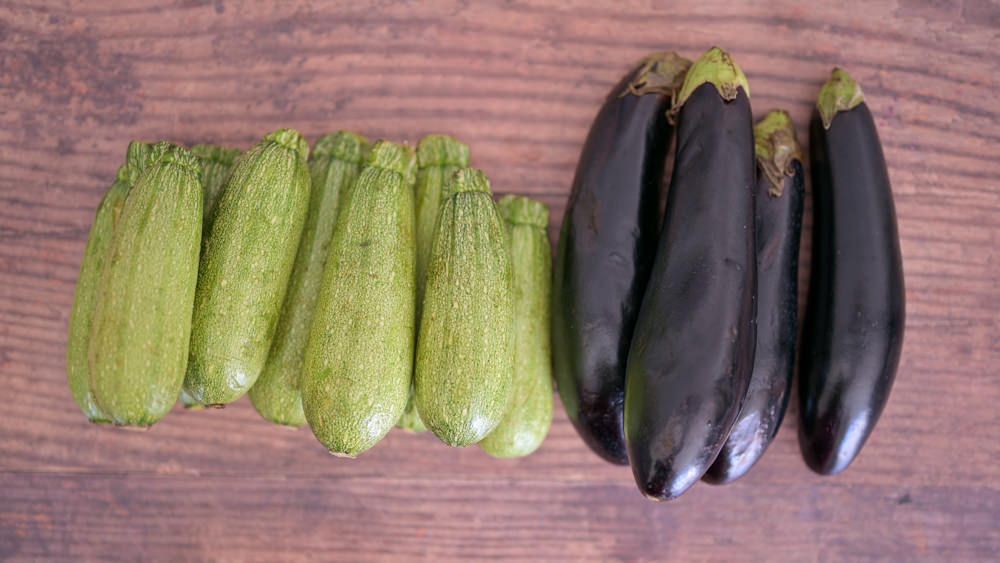 The best eggplants to stuff for this stuffed zucchini and eggplants dish is known as “Italian eggplant.” Look for medium (5-6 inch) or smaller eggplants with a thinner skin such as the baby eggplants. Lastly, try and choose eggplants that are similar size to the zucchini/squash you are using, so that way they will cook evenly in the same amount of time.

For both the squash and the eggplant, I try to choose ones that are a little wider on the bottom and narrow in the opening. That way, I can fill a lot of the stuffing in them, but there is less risk of the stuffing coming out in the cooking process.

You begin by hollowing out the zucchini and eggplant then stuffing them. You want the squash and eggplants to be at room temperature before you hollow them out. This prevents the vegetables from cracking while you core them.

Also, the eggplants need to be softened up by rolling them on a flat surface before coring. This helps the insides come out faster and easier. The corer that I use I bought in Lebanon a couple years ago, but I have seen them sold at kitchen specialty stores here as well. Here’s a few of them I found on Amazon: Zucchini Squash Vegetable Corer or Better Houseware Zucchini Corer. Once you have the corer, you are ready to make this hearty and delicious meal!

Do not throw away the insides of the zucchini, save them to make a delicious sautéed appetizer.

Prepare your zucchini by cutting off the stems and ends. 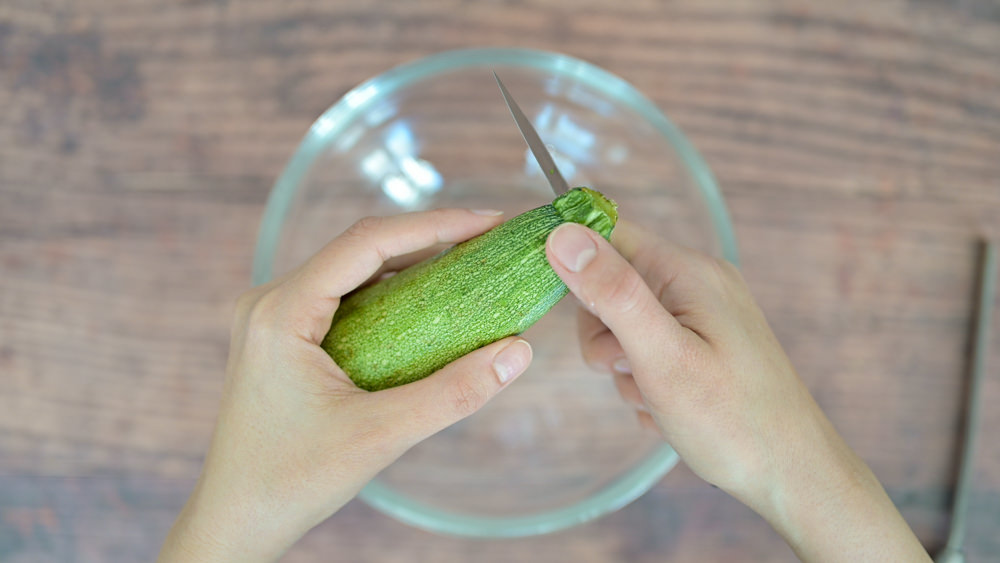 Prepare the eggplant by rolling them on a hard surface (like your countertop) using the palm of your hand to soften the insides which will make it easier to hollow out. 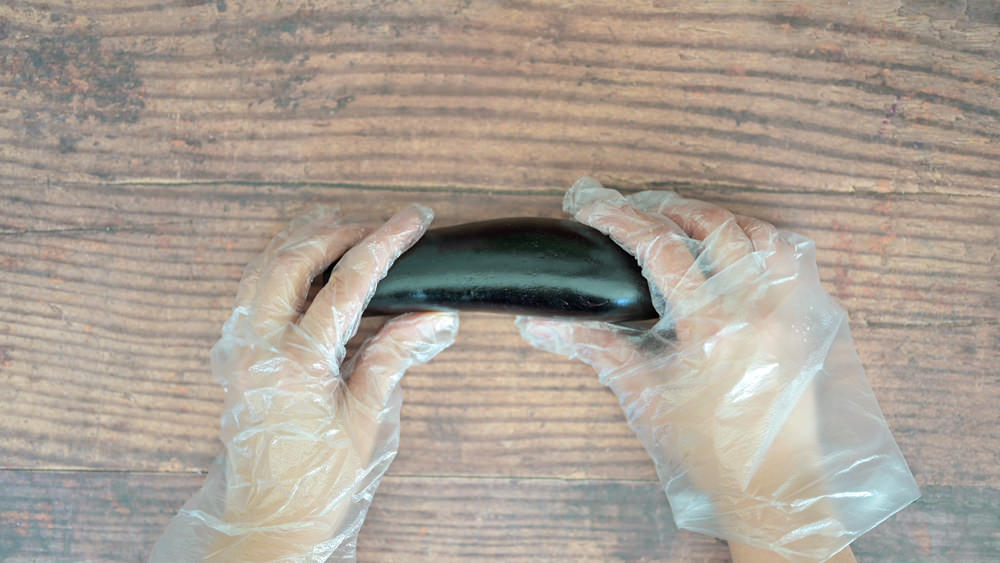 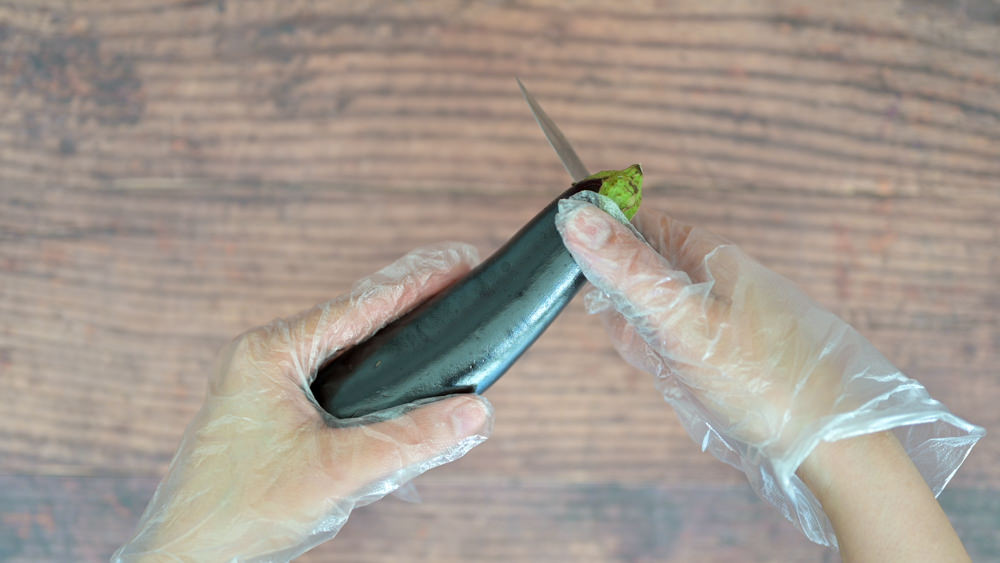 Proceed to cut the stems off the eggplant after you have rolled them.

Try not to be too rough as you will crack the squash with the corer. Also, it is easier to core them if they are at room temperature rather than cold.

Once you have cored them, wash them well with cold water and set aside in a strainer. 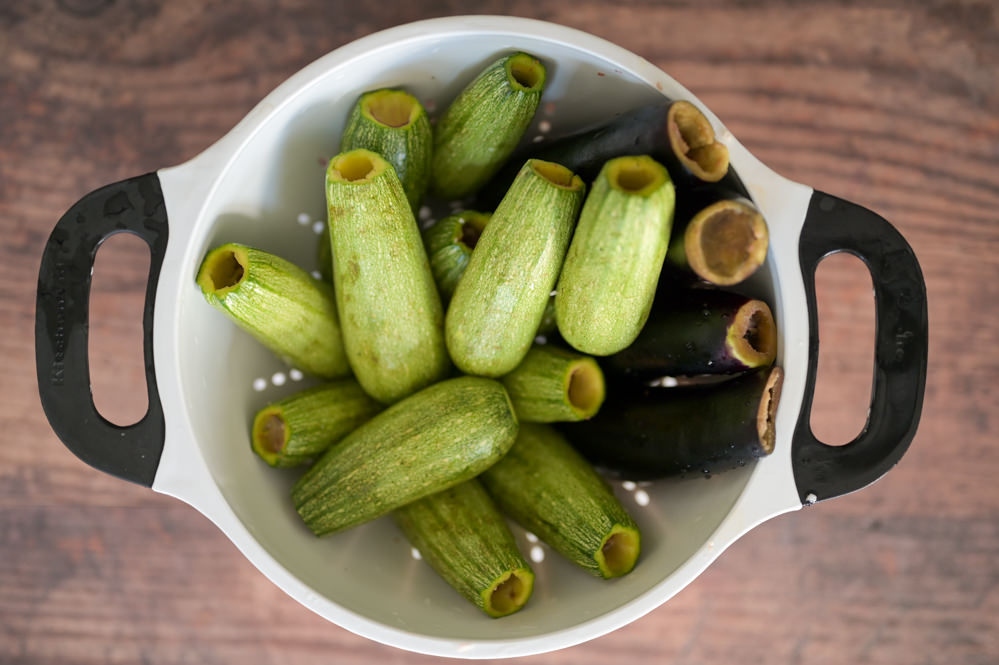 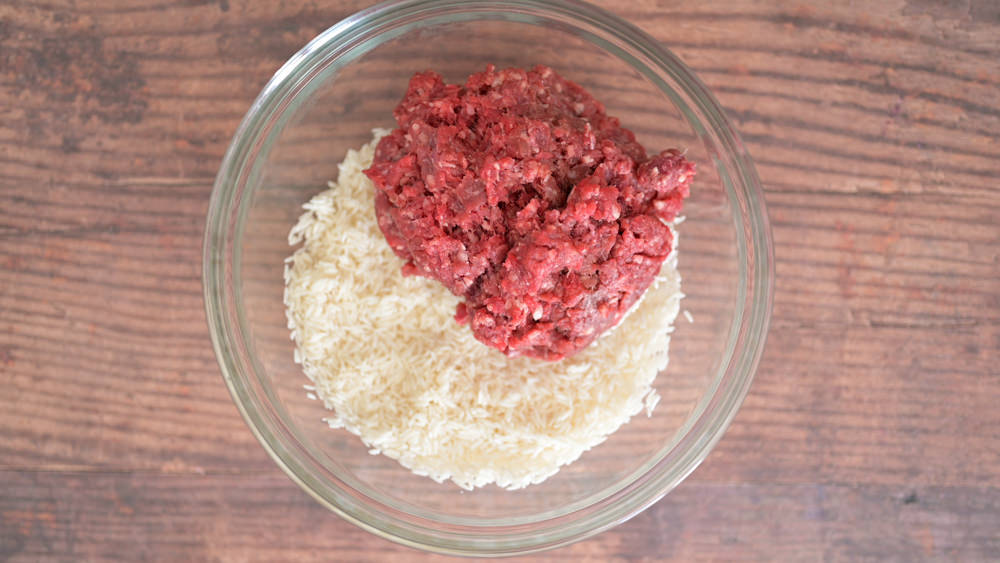 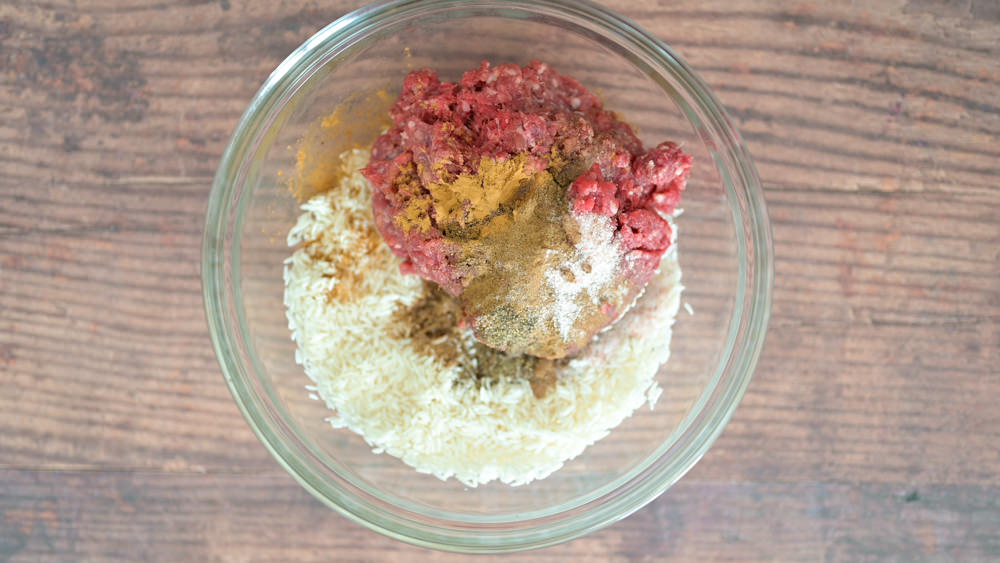 Mix well but be careful not to break the rice as it is sensitive when not cooked. 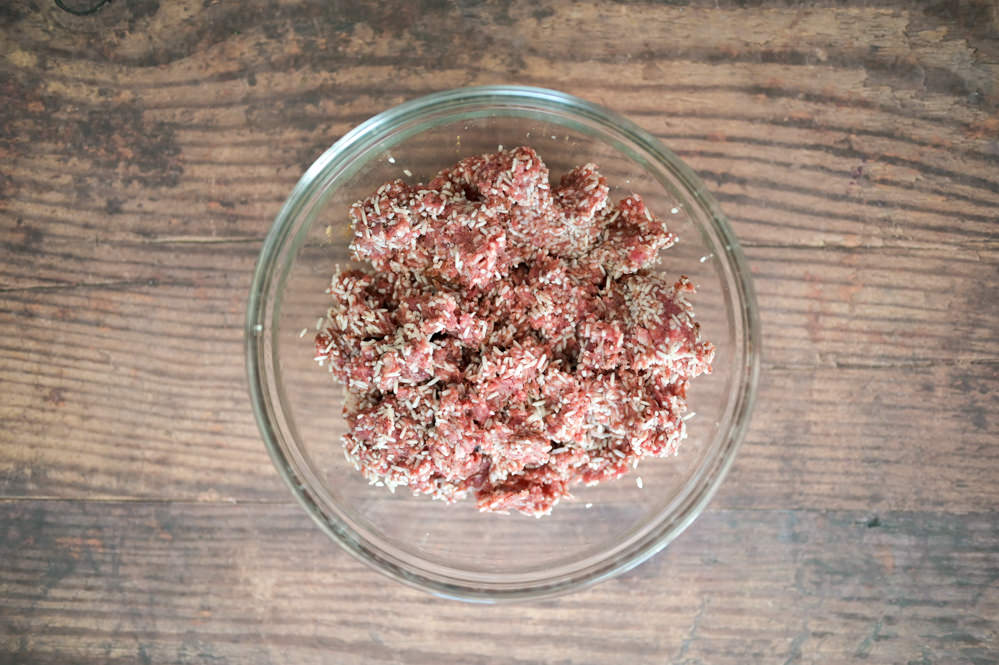 Stuff the squash and eggplant with your filling. Do not overfill or they will explode while cooking. Leave about 1 inch of room at the top. 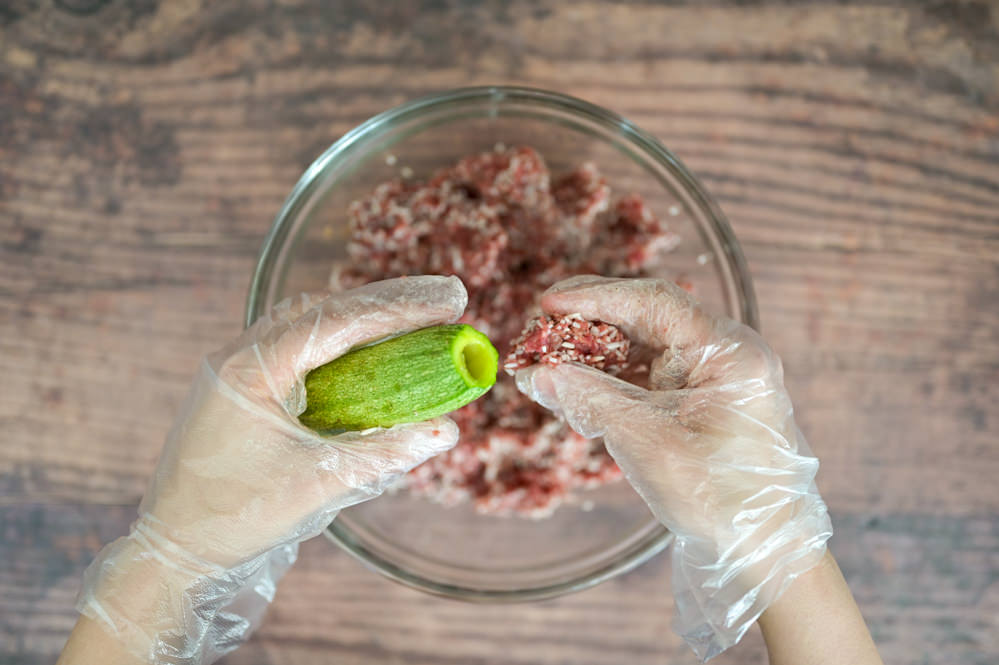 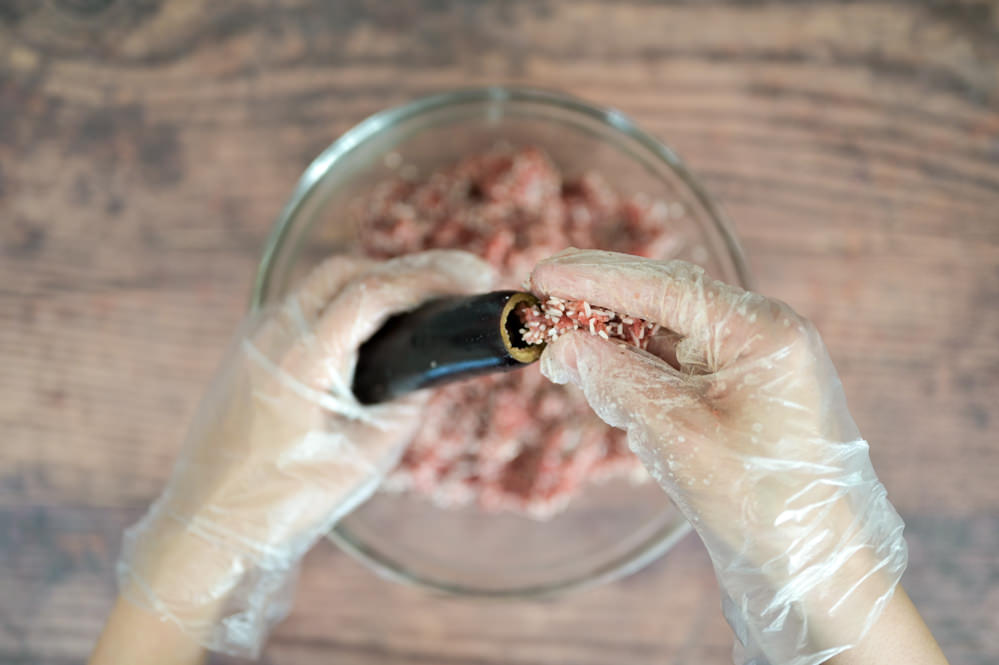 Cut a medium sized tomato into chunks. Put one chunk of tomato in each of the stuffed squash and eggplant. This helps the filling stay inside. 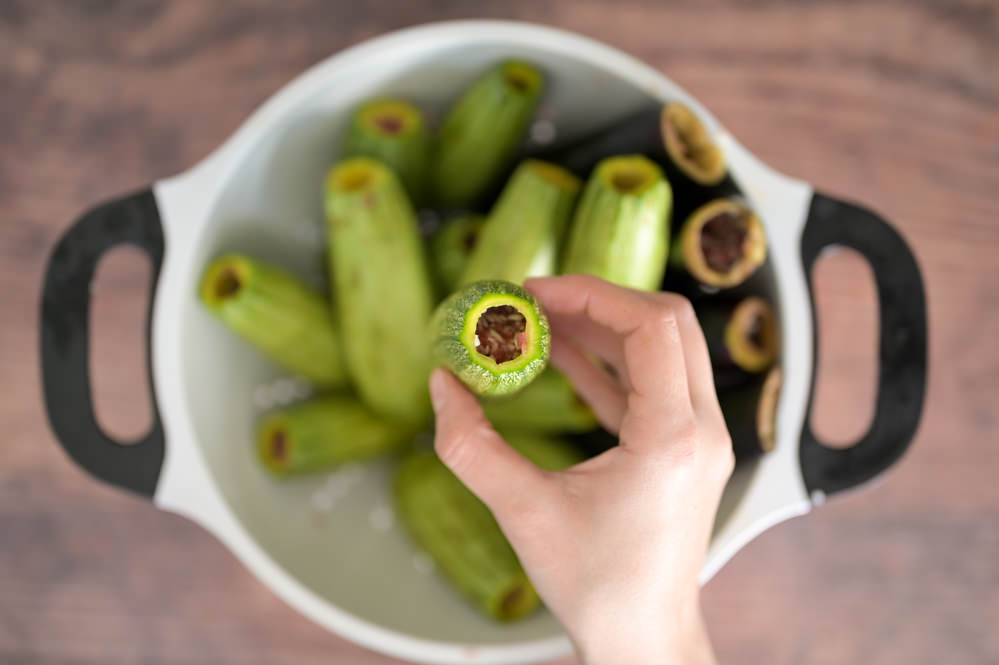 Place all the stuffed squash and eggplant into a large pot. Add the tomato paste, crushed garlic, and season with salt and pepper. 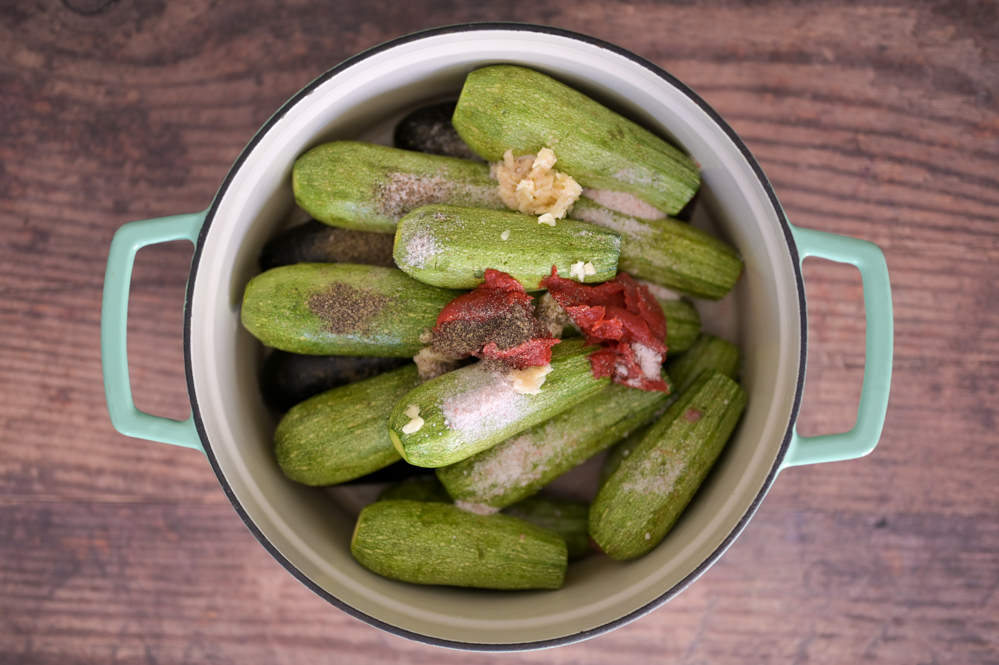 Fill with hot water until all the squash are covered. For me, this took about 8 cups of water. Cook on medium-high heat for 30 minutes. 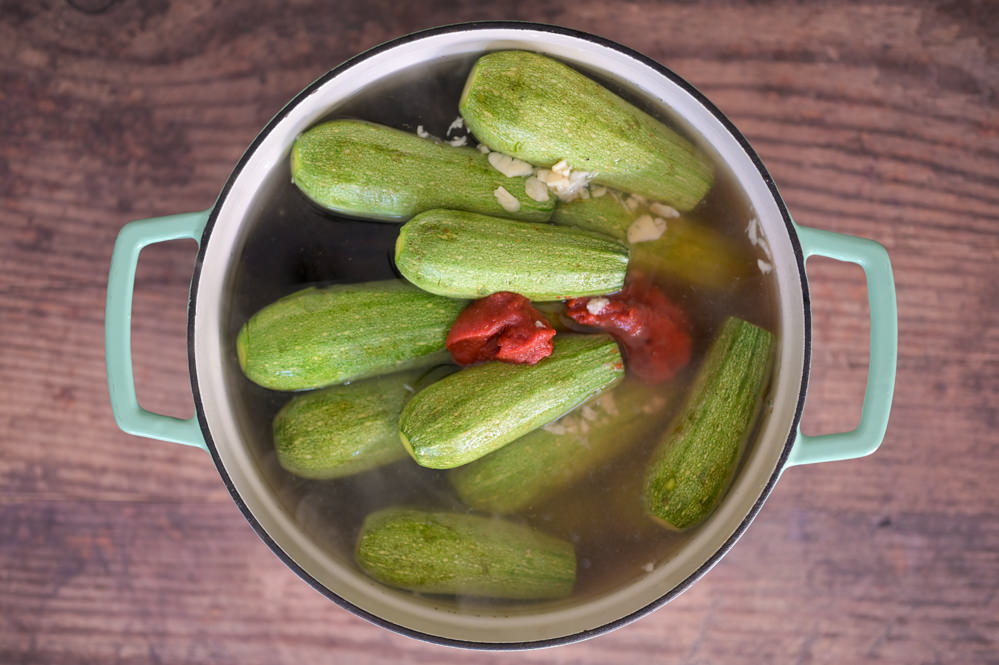 After the 30 minutes, add the dried mint. Cook for an additional 5-10 minutes. 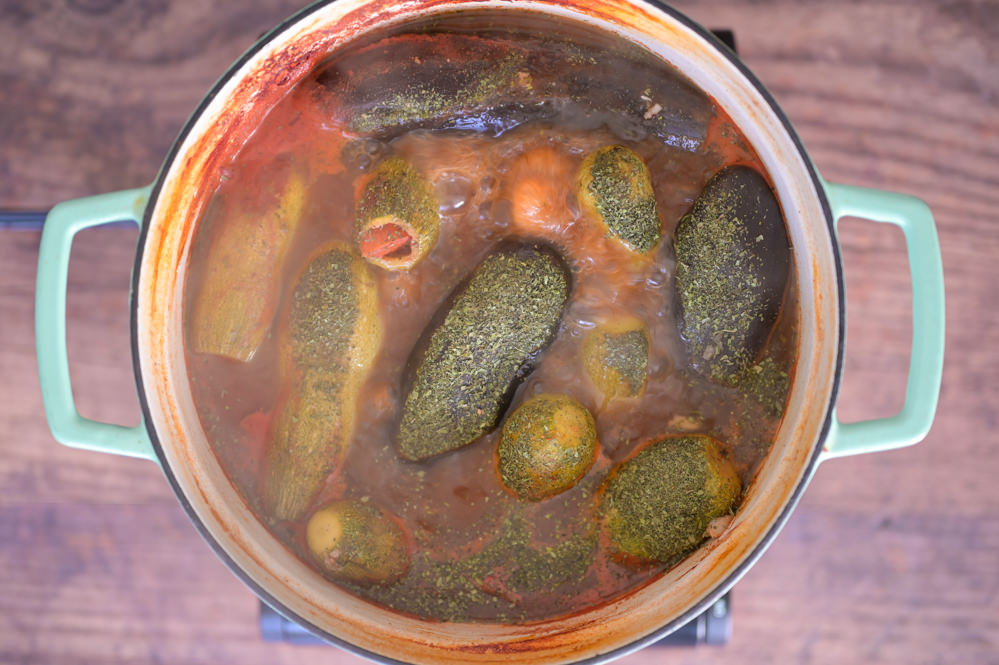 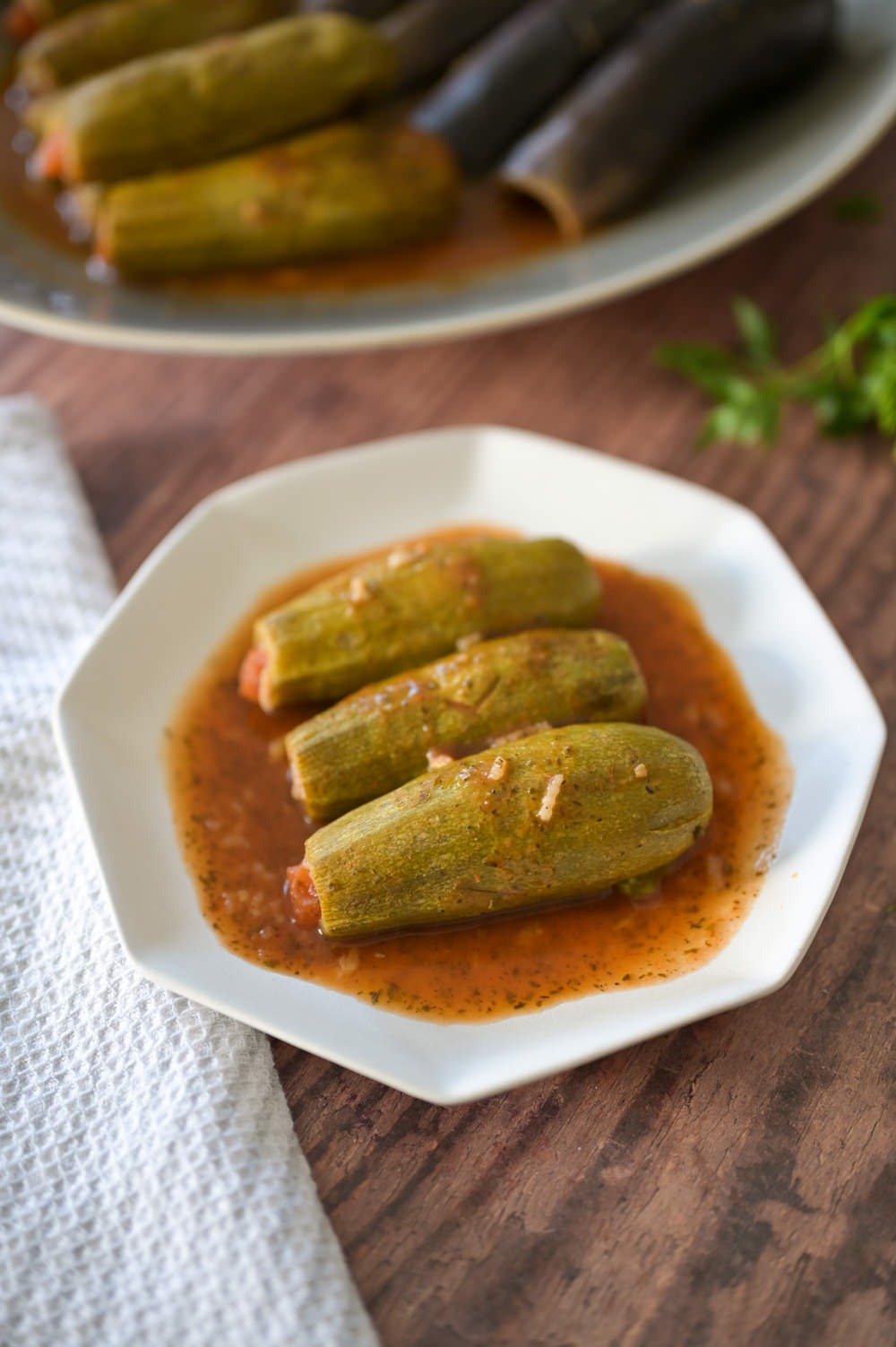 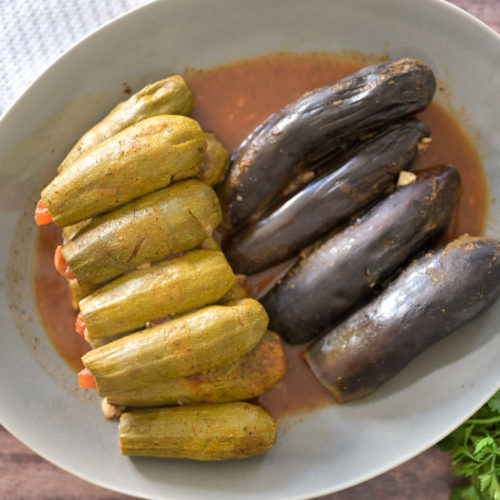 Since you are using the zucchini/eggplant skins only, you will have the insides leftover which you can reuse in another dish instead of throwing them out. One popular use for the leftover zucchini insides is to sauté them in a pan with a little olive oil, salt, and pepper, and then toss them with eggs for a healthy fried egg and zucchini dish! You can chop the leftover zucchini and use in recipes such as “zucchini bread” or zucchini fritters. Free to get creative and use the whole vegetable.