Seven spices, which is known in Arabic as sabaa’ Baharat, is a spice blend of 7 different spices used in Middle-Eastern cooking. If you follow my recipes, you will notice that this Lebanese blend is very widely used. Almost all the popular Middle-Eastern foods have sabaa’ Baharat listed as an ingredient. For example, Lebanese rice and chicken gets all its flavor from this blend, as does kafta and lahm bi ajeen. I like to purchase my sabaa’ Baharat pre-made from Lebanon when I visit. When I run out, I buy it from my local Middle-Eastern grocer. However, I have received quite a few inquiries in regards to the exact spices that are in sabaa’ Baharat as some people have not been able to find it locally to them. Therefore, I decided to dedicate a post to this!

In my research, I have noticed that there are many different variations of sabaa’ Baharat. Some variations are cultural, depending on the country of origin. Many of the Middle-Eastern countries such as Syria, Egypt, and Iraq each have their own special blend. But, even the “Lebanese” version varies a bit. Of the seven different spices in this spice blend, four of them are prevalent in almost every recipe I found. Those four spices are allspice, cinnamon, black pepper, and cloves. Some other spices that are often included are ground ginger, fenugreek, nutmeg, white pepper, cumin and ground coriander.

Cinnamon is quite often used in meat dishes in Lebanese cooking. The warmth of its flavor pairs so well with the remaining ingredients. I tend to buy my cinnamon ground but, I do keep cinnamon sticks on hand for other purposes such as boiling beef or chicken for stock.

Cloves however, I tend to use whole (also to make stock) so, I will grind it fresh for this spice blend. The ratio of spices in this spice blend is 1:1 for all the spices except cloves. Since cloves have a pungent taste, I am halving it, as to not overpower the overall flavor.

Unlike cinnamon, cloves and cumin which tend to be some of the key spices in Indian cuisine, allspice and coriander are actually more often seen in Middle-eastern cooking. Coriander is actually the dried seeds of the cilantro plant. I found this out this summer when my cilantro plant started budding flowers and the seeds were falling out!

After testing out a few different variations, I decided on the following seven spices- allspice, black pepper, cinnamon, ground cloves, cumin, ground coriander, and white pepper. I felt like this combination most resembled the pre-made blend I purchase in Lebanon. If, however, you do not happen to have all these spices on hand or prefer one over the other, feel free to swap out one for another from my list above. The difference in flavor is not too noticeable as long as the four essential spices I mentioned earlier are included. After grinding up the spices and combining them, I store them in a mason jar to help preserve freshness. This recipe can be easily doubled or tripled for a larger quantity, I like to grind as needed every few weeks for the freshest taste. 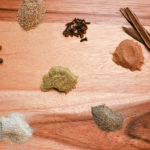 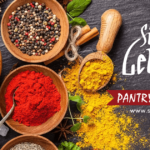 What’s in my Pantry?

25 of the Best Super Bowl Appetizers 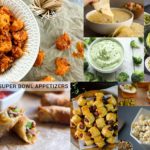