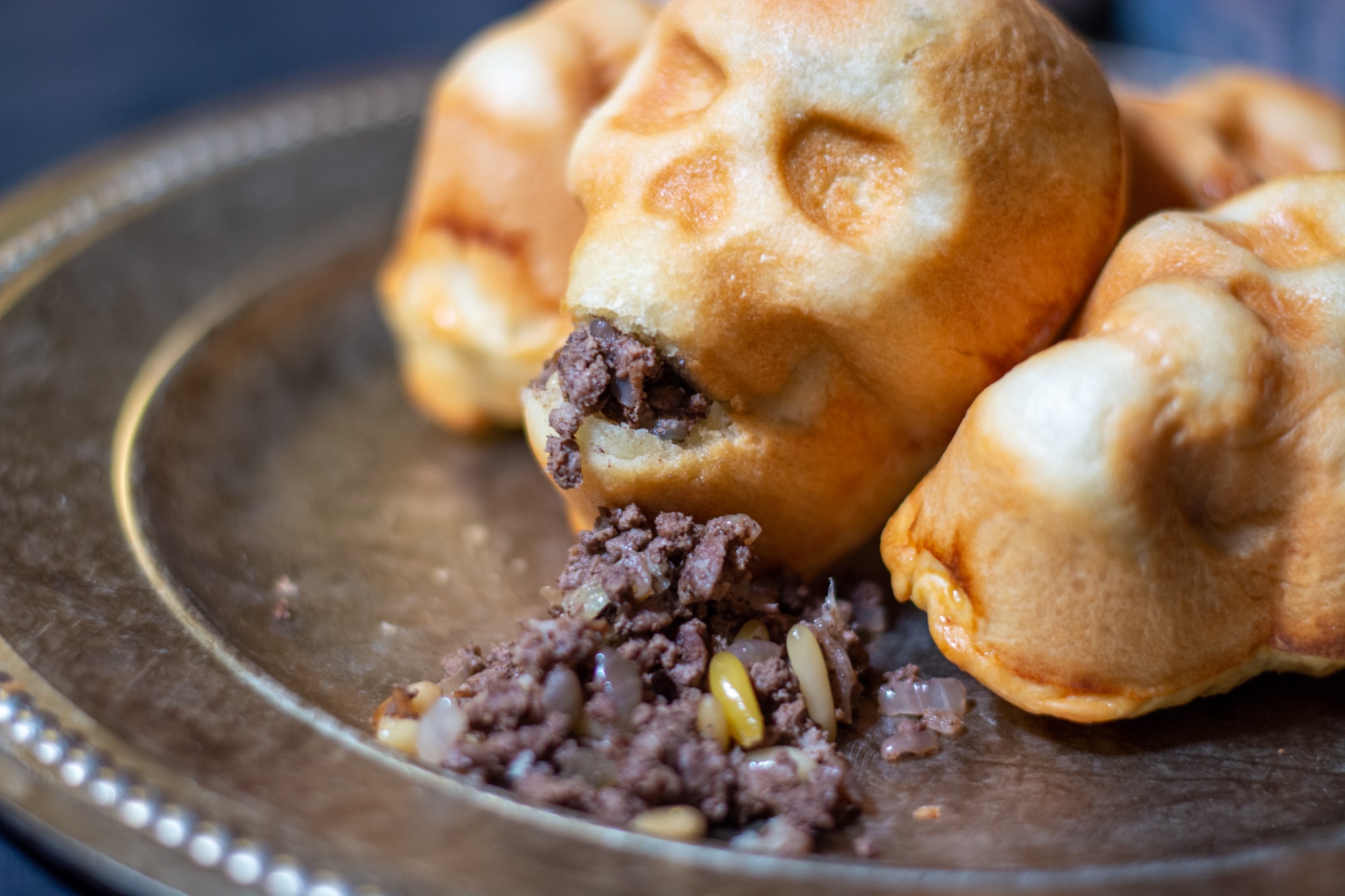 These beef Fatayer look like nothing you’ve ever eaten. Serve these at your Halloween party this year, and impress your family and friends with these creepy but delicious Lebanese meat pies!

Fatayer are Lebanese pies filled with a variety of different fillings. A few months ago, I shared with you guys my recipe for Spinach Fatayer. These are the beef Fatayer with a fun Halloween twist. I was at Williams Sonoma a few weeks ago when I came across this Nordic Ware Skull pan. I thought it would make the perfect pan for a Halloween recipe. At first I thought sweet, some sort of skull cake. I tested out a red velvet cake, but to honest, I wasn’t impressed. I wanted something more creative so I thought I would switch over to the savory route. That’s when I thought skull meat pies.

My first thought was actually Sweeney Todd, the play turned into movie about a mad-man barber who kills people and gives his meat to a woman who uses them for her meat pies. That thought inspired me to use the skull pan for my Fatayer. The dough recipe is the same as my dough recipe for the Spinach Fatayer. The meat filling is a mix of sautéed ground beef, onions, pine nuts and 7 spices. The skulls pies are made by rolling out the risen dough using a rolling pin, and placed in the skull molding carefully. There will be excess dough, so be sure to cut off as much as you can while pinching together the seams. I started off with 6 dough balls, but with the extra dough I cut off, I had enough to make 2 more meat pies for a total of 8.

These meat pies will be the hit of your Halloween gathering or party, for both children and adults. I hope you enjoy them as much as we did!

Mix half a cup of warm milk with sugar and yeast. Wait 10min for yeast to double in size.

Once the yeast has foamed and doubled in size, add salt, and half of the flour. Turn the mixer on low speed and slowly add the vegetable oil, rest of the milk and flour. Higher the speed and let knead until the dough comes together. 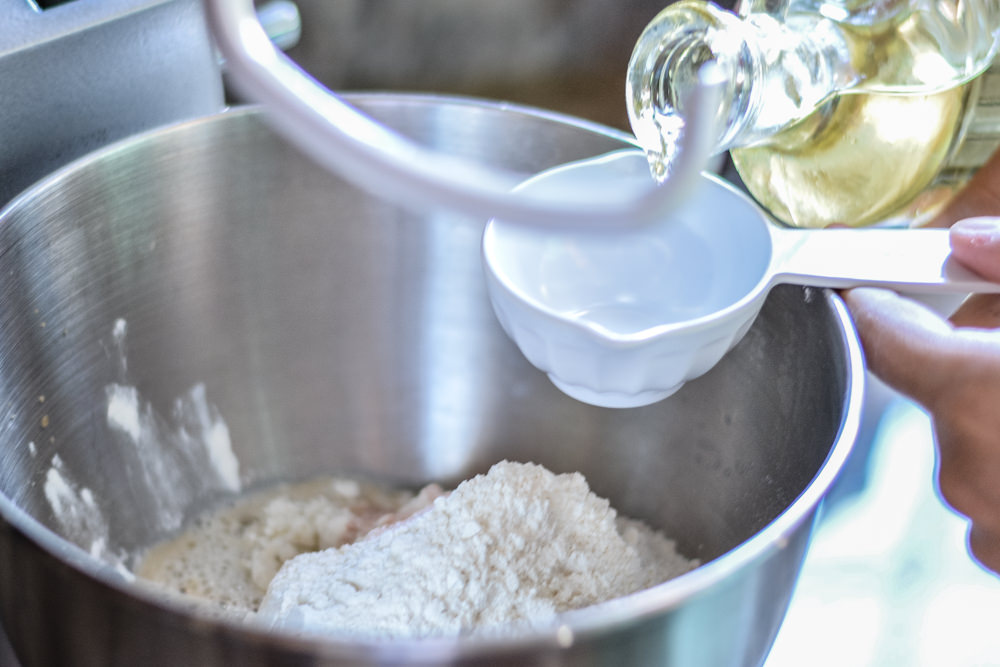 Remove the dough from the mixer and form a ball using excess flour. Place the dough back in the ball and cover with a clean kitchen towel. Place in a warm area for about 1 hour to rise.

Once the dough has doubled in size, form into 6 small dough balls using excess flour.
Cover with kitchen towel for another 30 min to rise again. 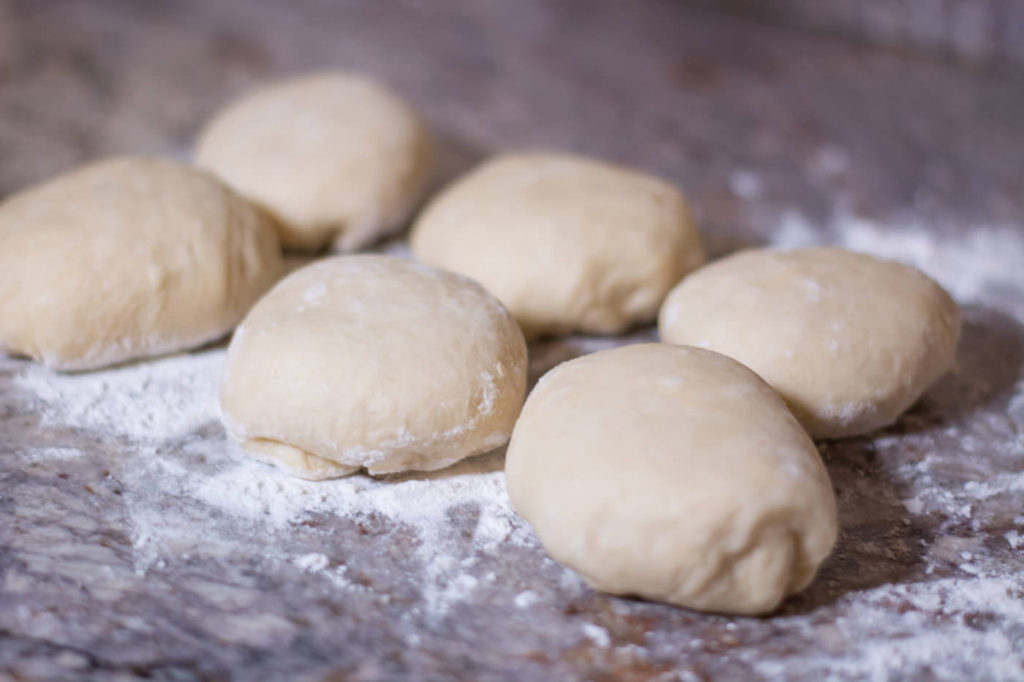 While the dough is rising, prepare the meat filling.
Sauté the ground beef on medium heat for about 5 minutes until all the water has evaporated. 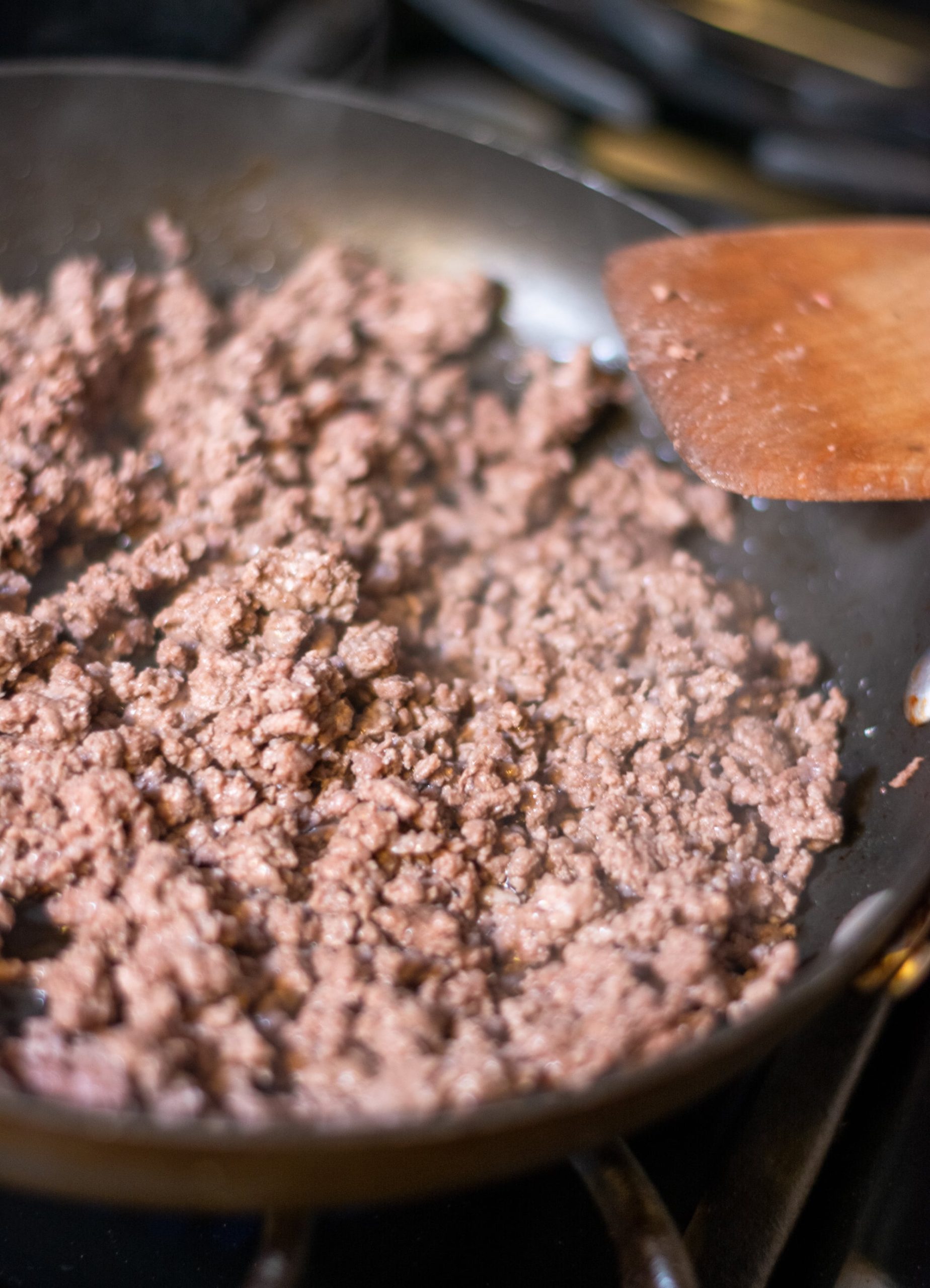 Finely chop the onion. Add the vegetable oil and chopped onions to the meat.
Sauté for 5 minutes until the onion is translucent. 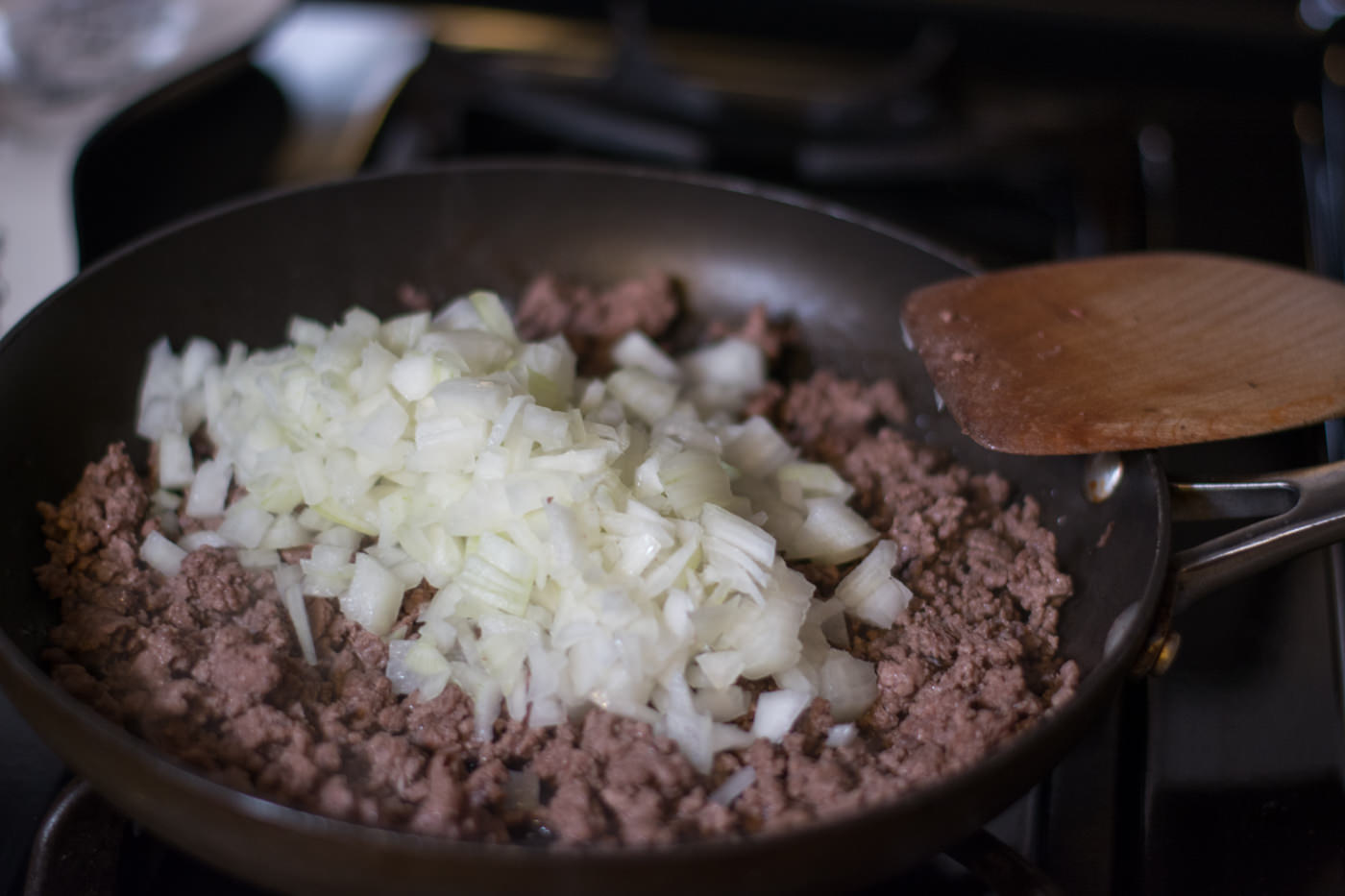 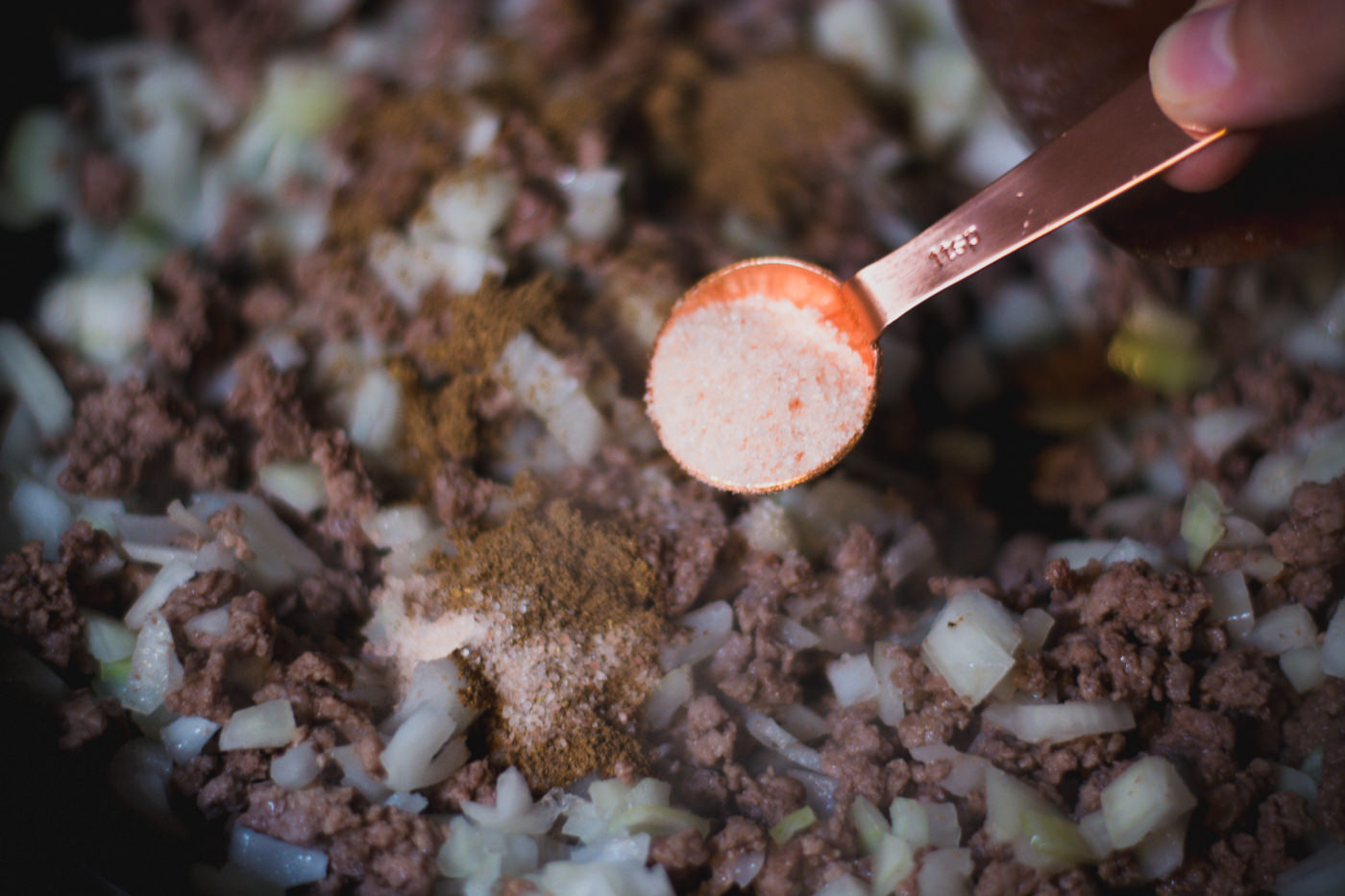 Preheat the oven to 375 degrees.
Using some vegetable oil and a pastry brush, brush the inside of the skull moldings to prevent the dough from sticking. 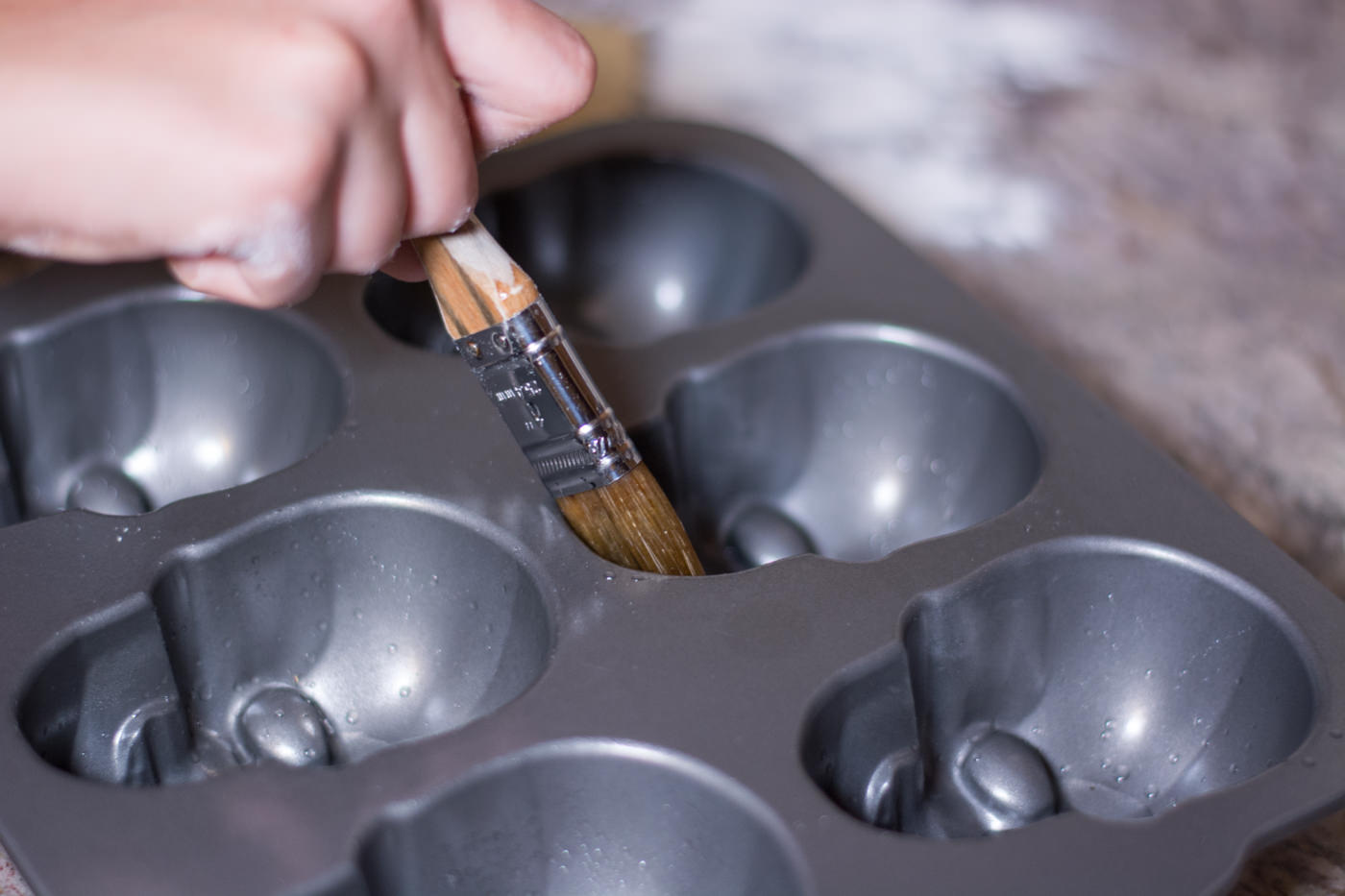 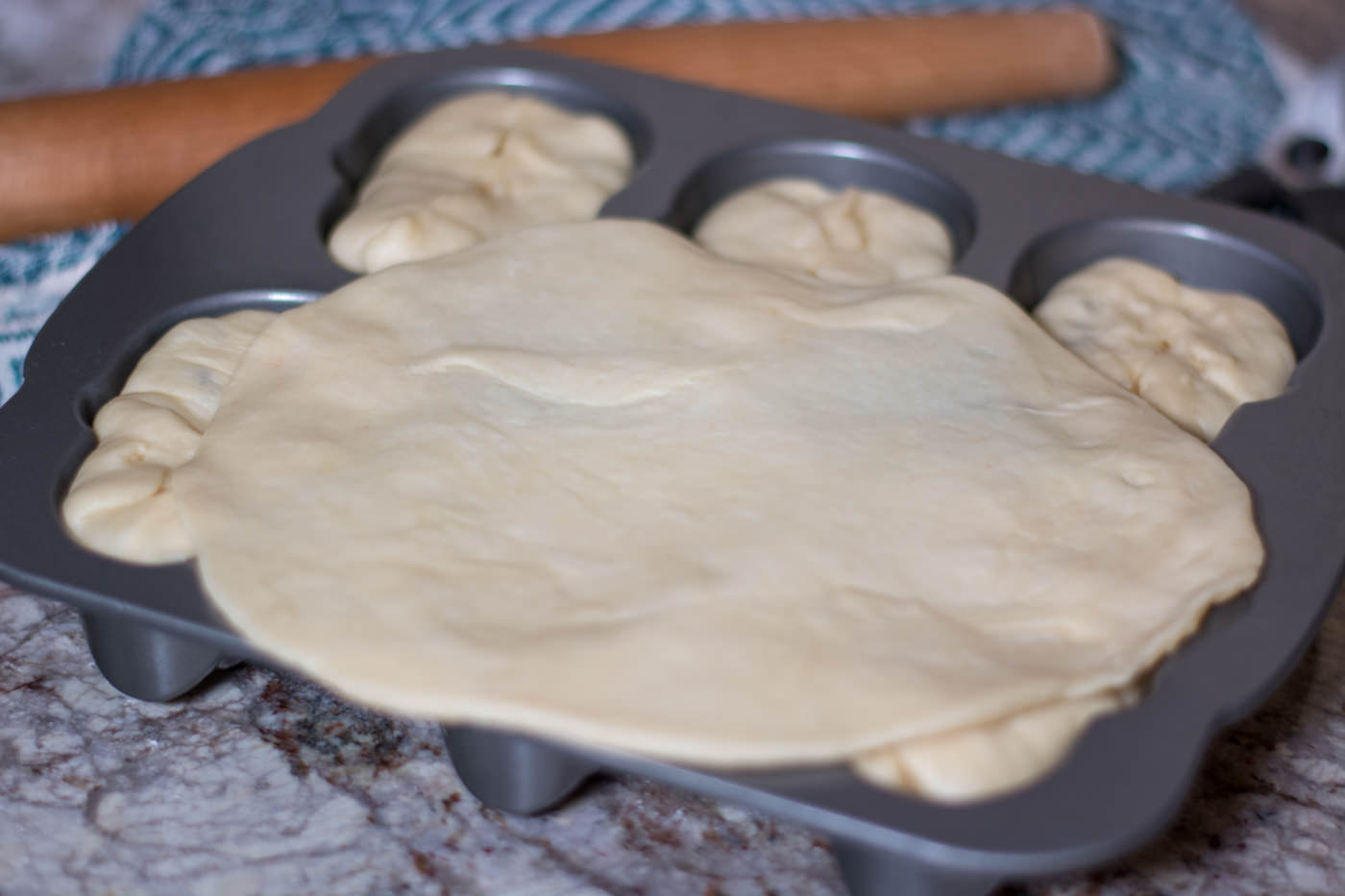 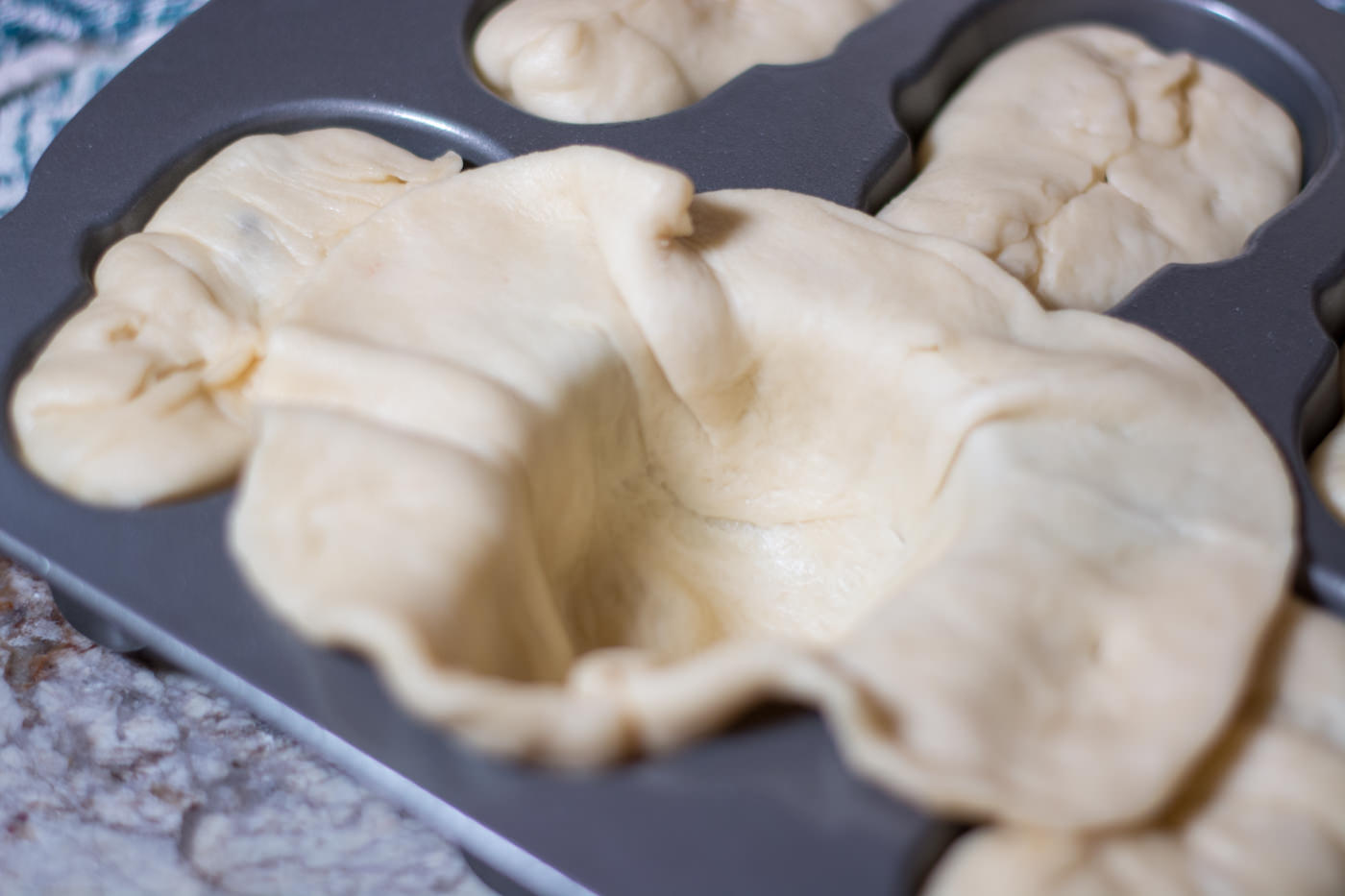 Place about 3 tablespoons of the meat filling inside the dough. Bring the bottom and top of the dough together to the middle and pinch the seams. 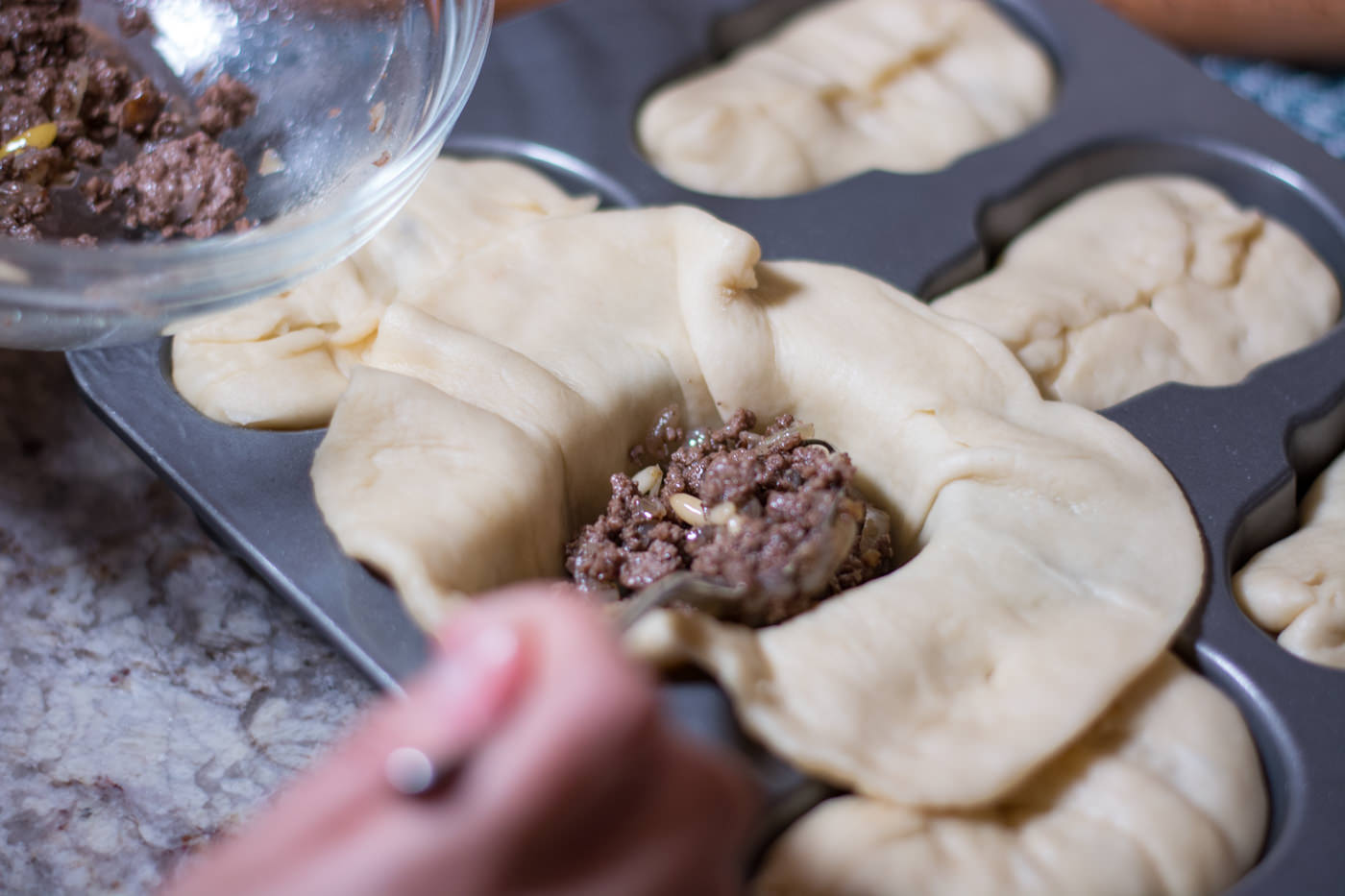 Bring the sides together and cut off all the excess dough, leaving only enough to close the seams. Pinch the seams together tightly. Repeat until you fill all 6 skulls. 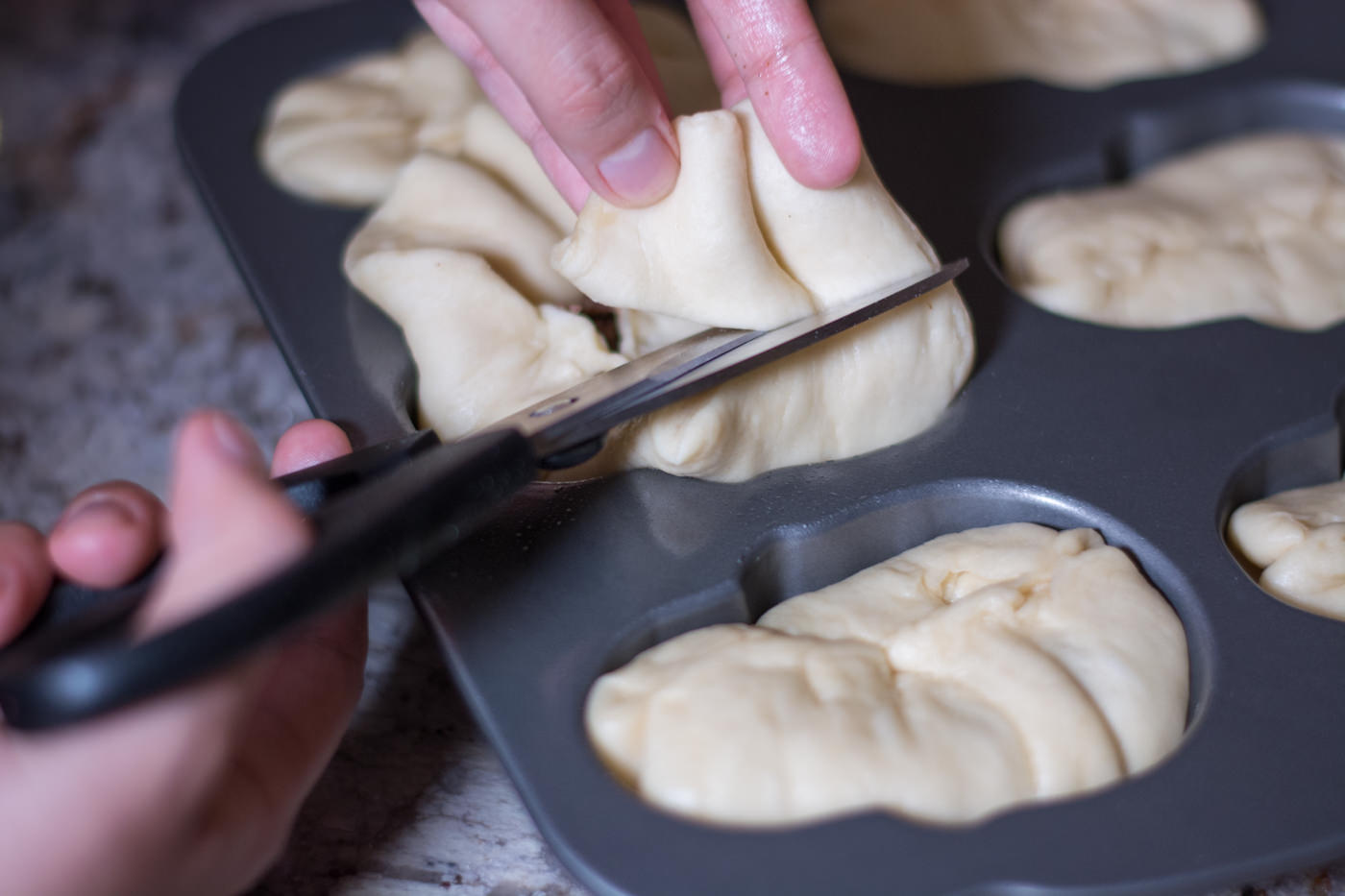 Whisk the egg and use the pastry brush to brush the top. Bake for 22 minutes (give or take) until golden brown. 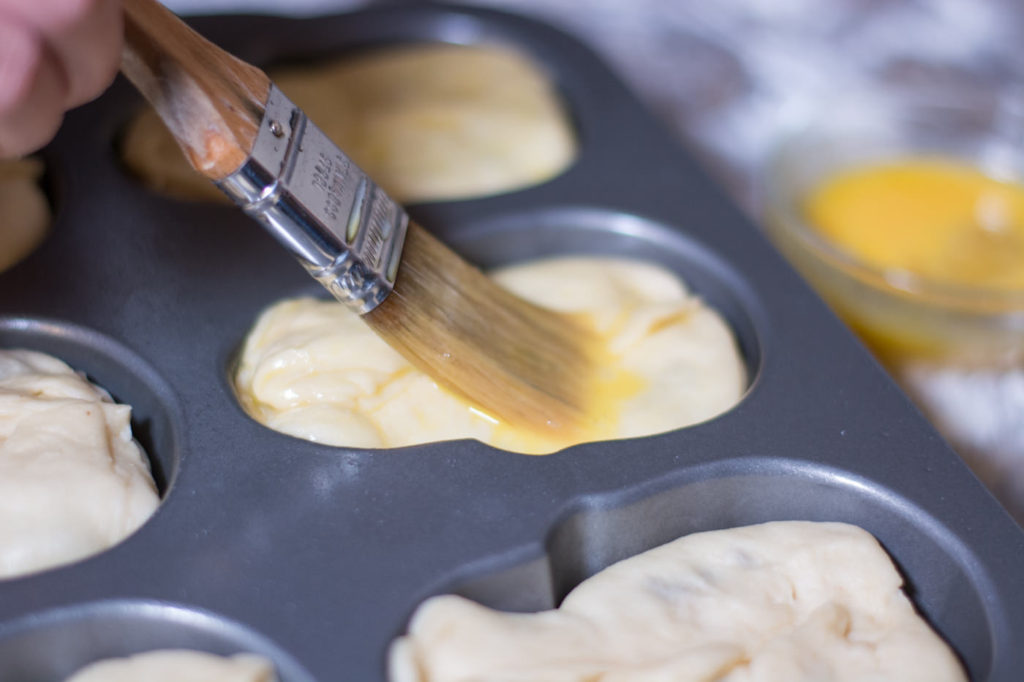 Let cool for 5 minutes before removing from the molds, they should come out pretty easily!
Serve hot or at room temperature. 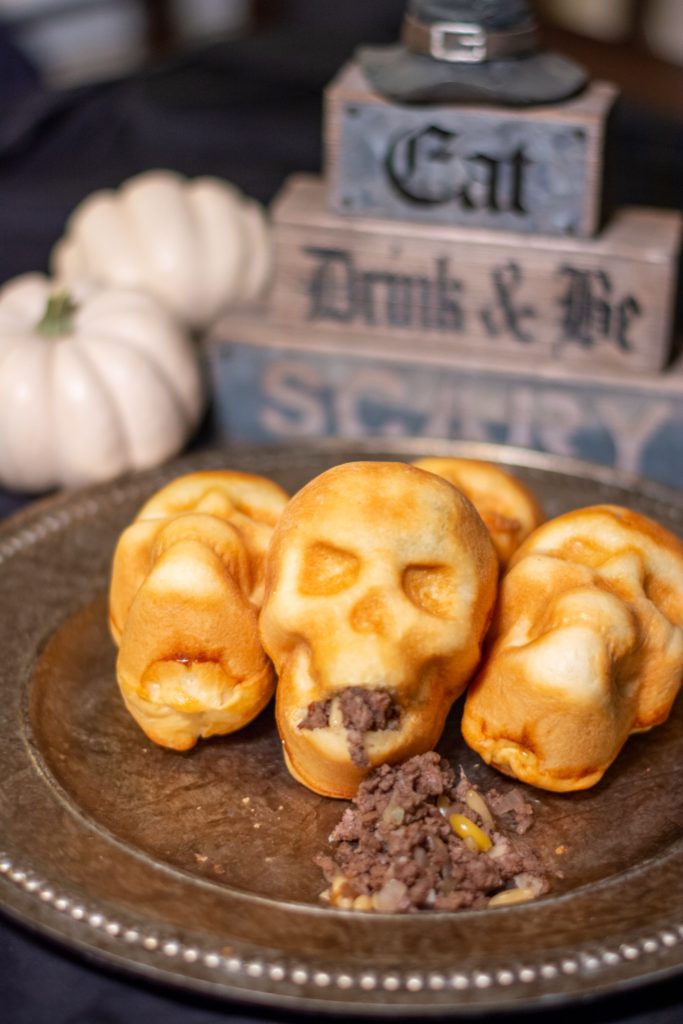