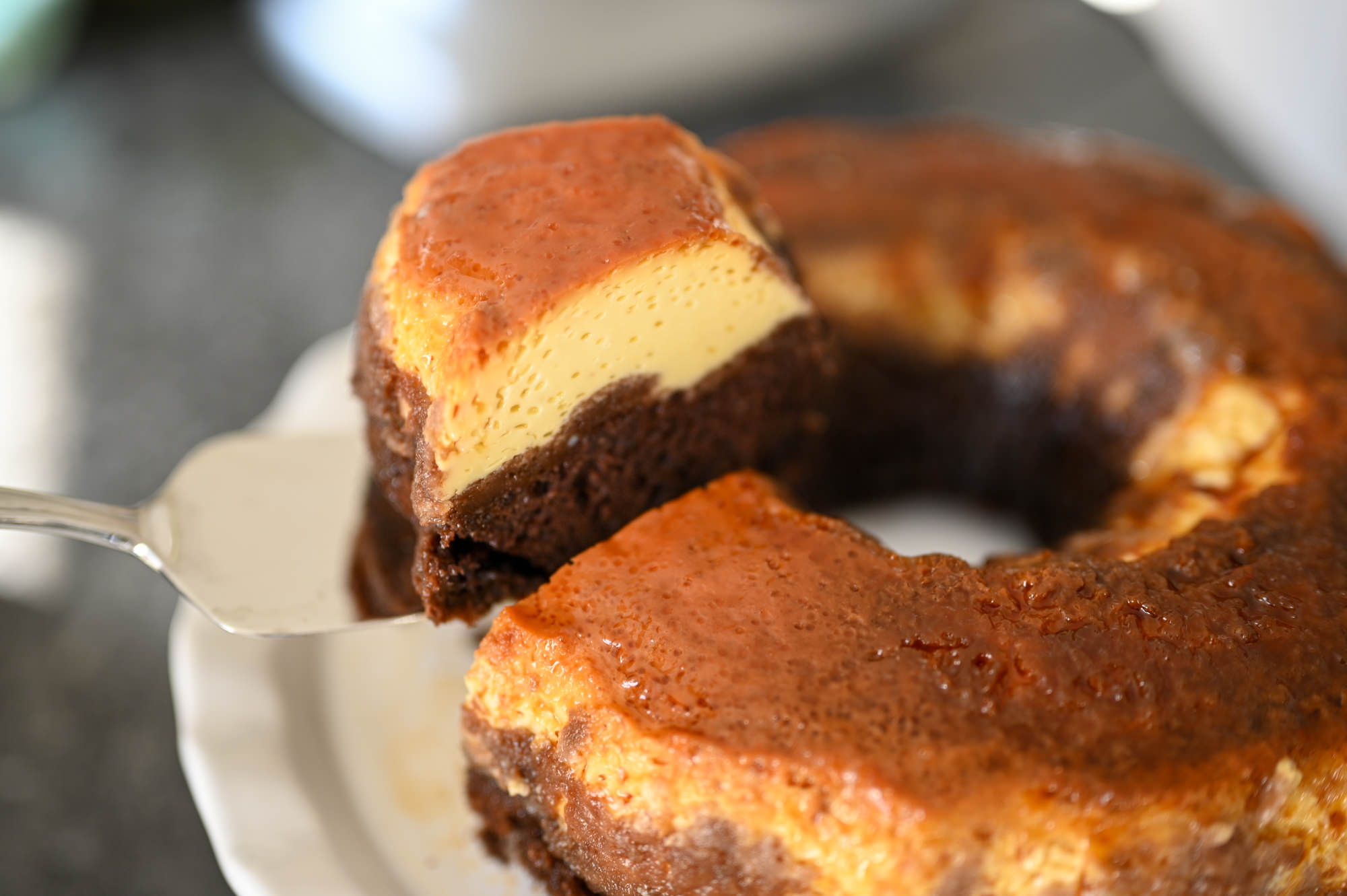 Silky and luscious crème caramel is combined with rich chocolate cake for a crowd-pleasing dessert known as ChocoFlan. Perfect for Holidays and large gatherings, this dessert serves up to 12 people.

Crème caramel is a creamy and rich custard made with eggs and milk. This dessert is a delicious fusion of a creamy, silky crème caramel and a rich chocolate cake for what is known as ChocoFlan.

While the classic Crème Caramel is a French dessert, the ChocoFlan is actually a Mexican dessert. Since the French had colonized Lebanon as part of the French Mandate for a couple decades in the early twentieth century, the French culture had a significant influence on the Lebanese society. In particular, the language and food influence is still present in the country today. In every Lebanese cookbook I own from Lebanon, both crème caramel, and this chocoflan recipes are in them. The choco-flan is typically called Crème caramel cake or chocolate cake in these cookbooks.

Traditionally, the Mexican ChocoFlan is made using Cajeta, a pre-made thick caramel sauce. In the Lebanese or Middle-eastern version, the caramel sauce is the same as the classic crème caramel. In my Crème caramel recipe, I make the caramel sauce using two basic ingredients of white granulated sugar and a splash of water. They are simmered together until dark golden brown and poured into the Bundt pan.

Additionally, the chocolate cake batter in the Lebanese cookbooks for this recipe, are not as moist and delicious as traditional American chocolate cake recipes. Accordingly, I have found chocolate cake mix to be the best option for this recipe , having the added benefit of also being the EASIEST option as well. You can use any kind of chocolate cake mix or devil’s food cake you prefer and prepare it according to the directions on the box using the required ingredients. I happen to have Duncan Hines one on hand so used that.

Crème caramel or Flan is often made using sweetened condensed milk instead of milk and sugar. I like using milk and sugar as I always have those ingredients on hand. While in many recipes you can swap out whole milk for a lower fat one, in this one I highly discourage doing so. Because of the low-fat content, lower fat milk will take FOREVER to set and just is not the same flavor or texture-wise. However, you can substitute half and half cream instead, if you wanted it even creamier.

When adding the custard mix over the chocolate cake batter, the batters appear to mix together. However, when baked, they layers separate completely, with the chocolate cake rising to the top (bottom once inverted.) Because of this, this cake is often called Magic or Impossible cake. Hope you enjoy this fusion dessert consisting of two personal favorites!

Preheat the oven to 375 degrees. Also, boil some water to prepare for a water bath later.*

In a small saucepan, cook the sugar and water for the caramel over medium-high heat for 6-8 minutes until dark golden brown. Do not use anything to mix the sugar, just swirl the saucepan around to mix every few minutes. Be careful because the caramel will go from dark golden brown to dark burnt brown in less than 30 seconds! 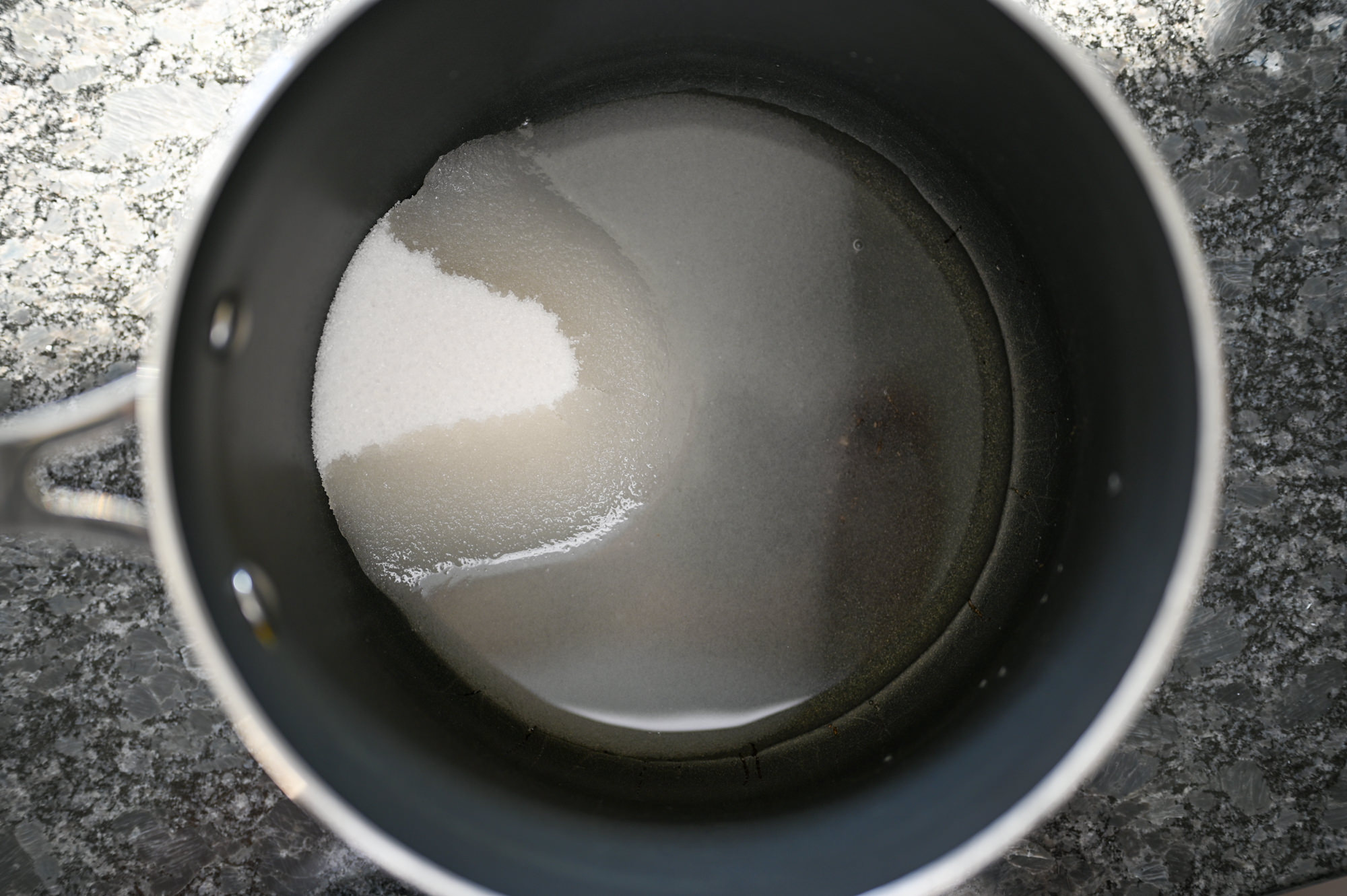 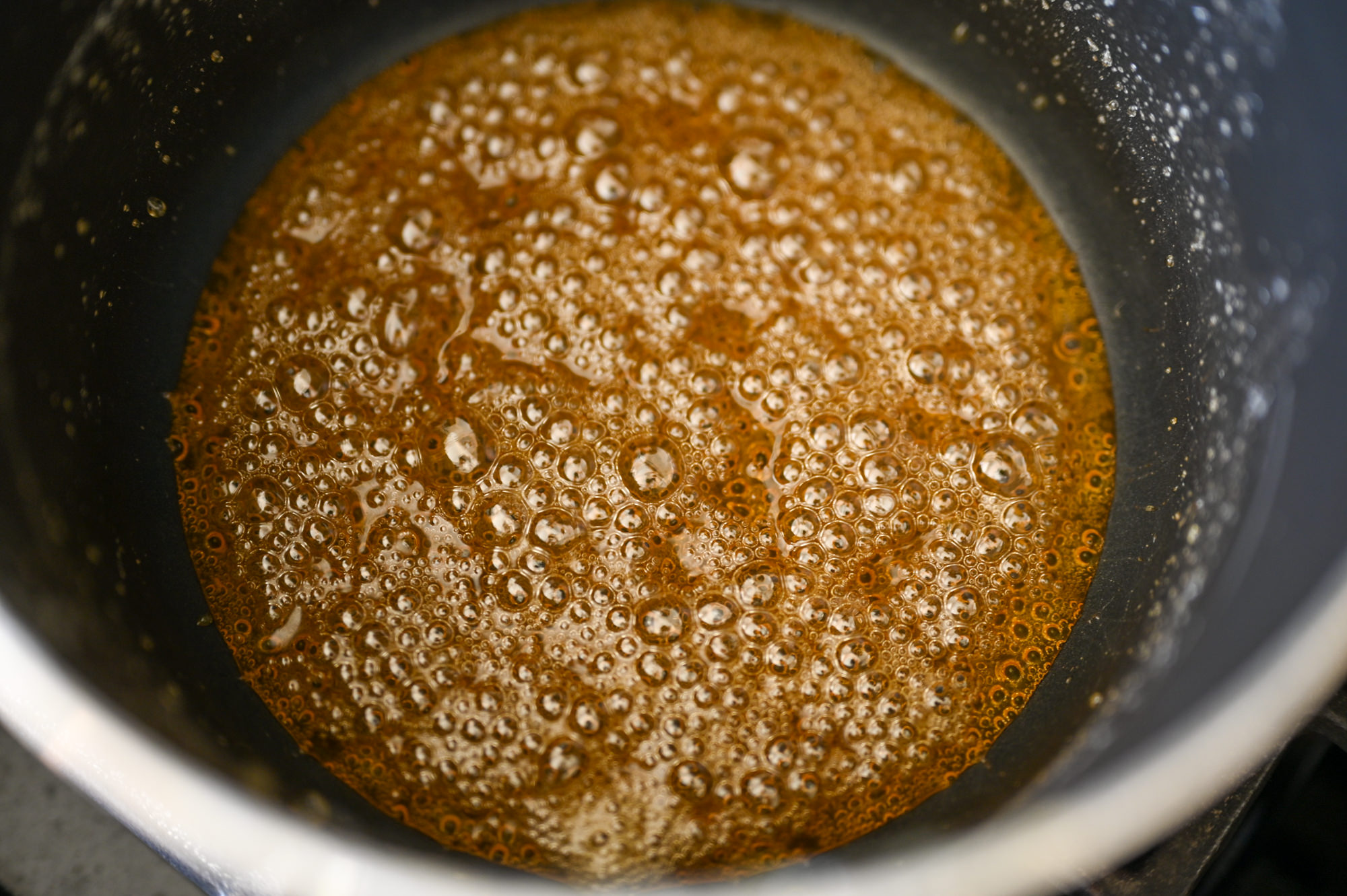 Pour the caramel in the Bundt pan as soon as it gets to the perfect color. Swirl the pan around to get the edges. 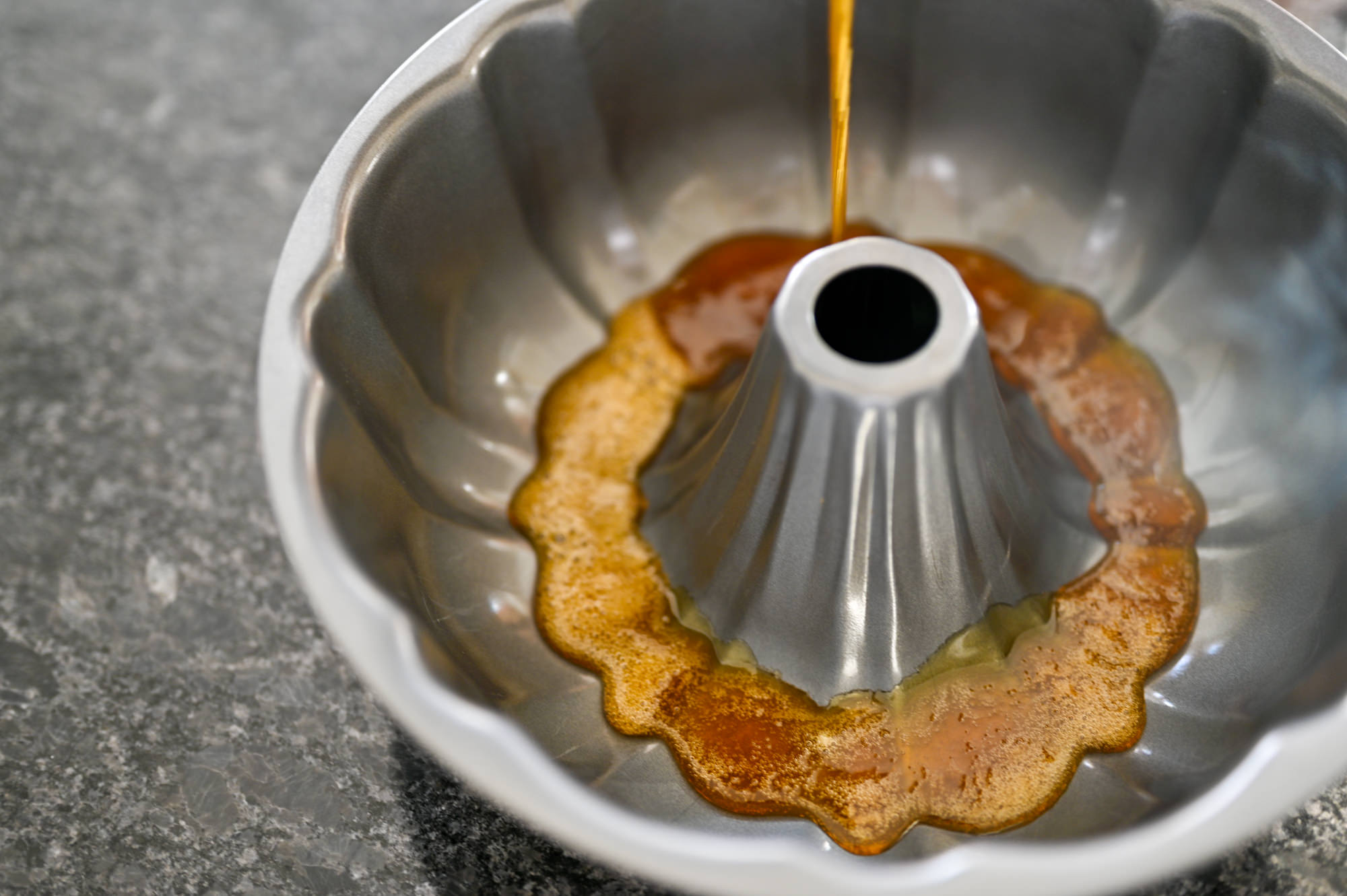 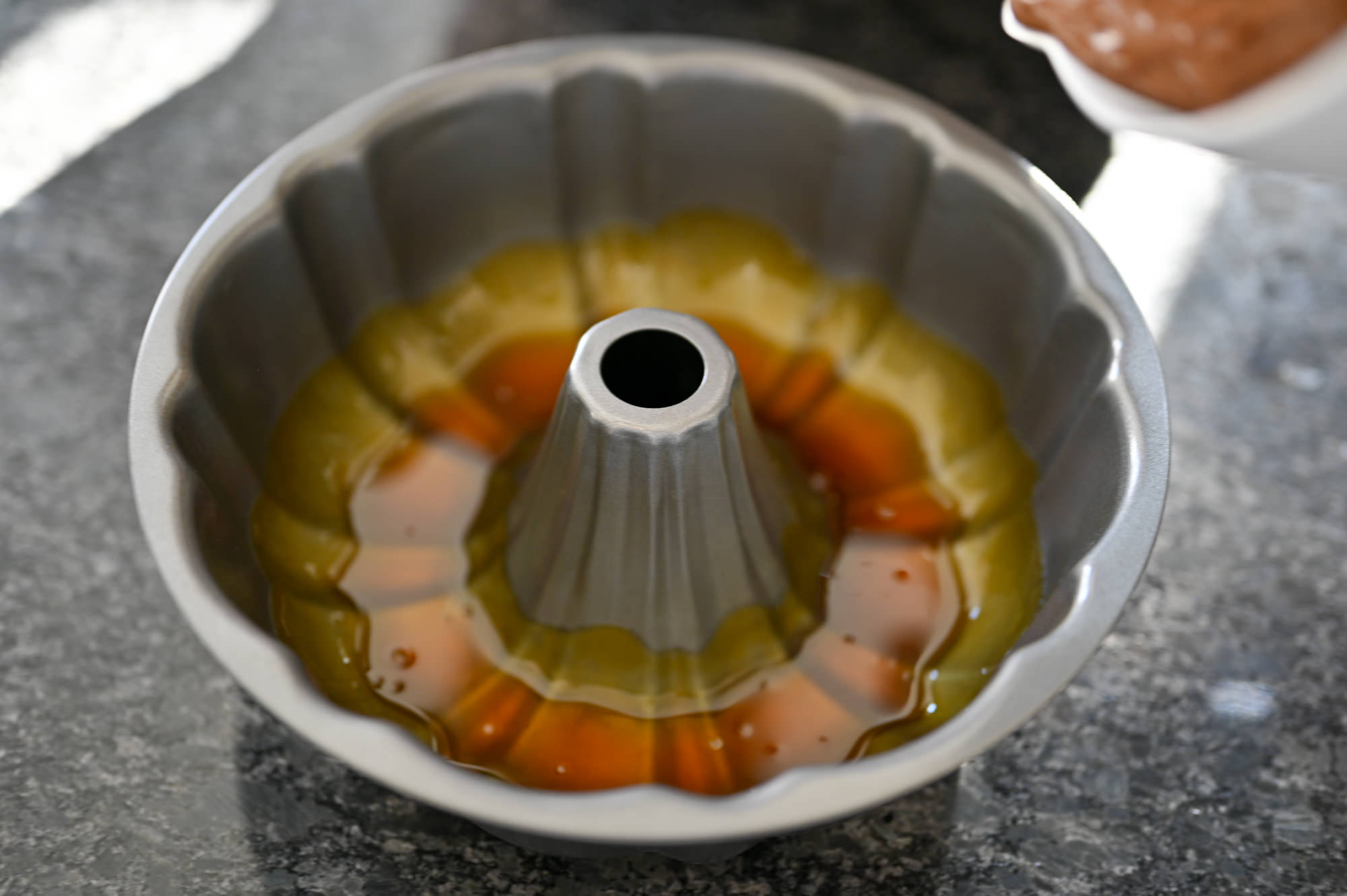 In a large bowl, prepare the chocolate cake mix according to box directions.
Once mixed thoroughly with no lumps, pour the chocolate batter over the caramel in the Bundt pan. 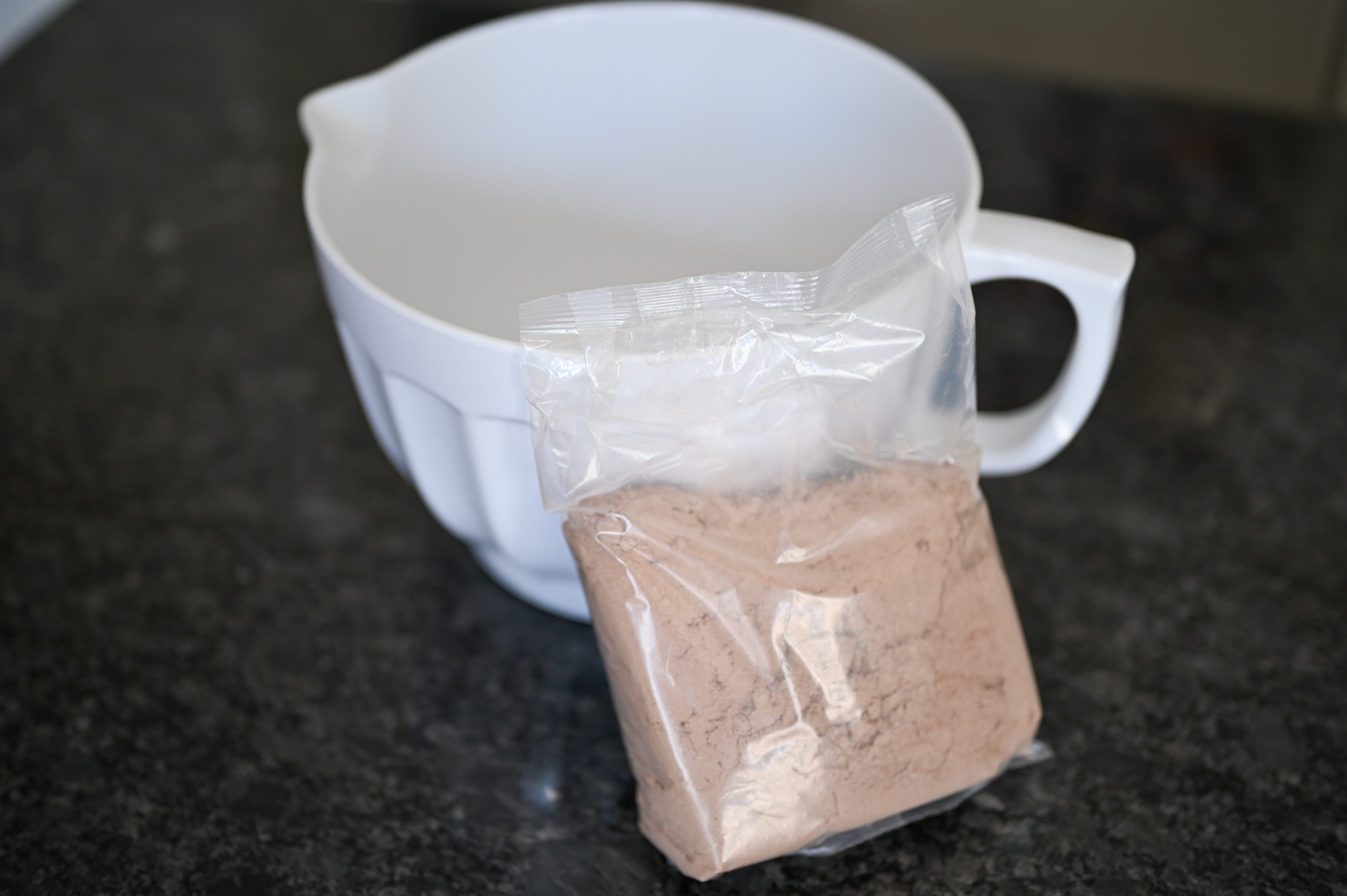 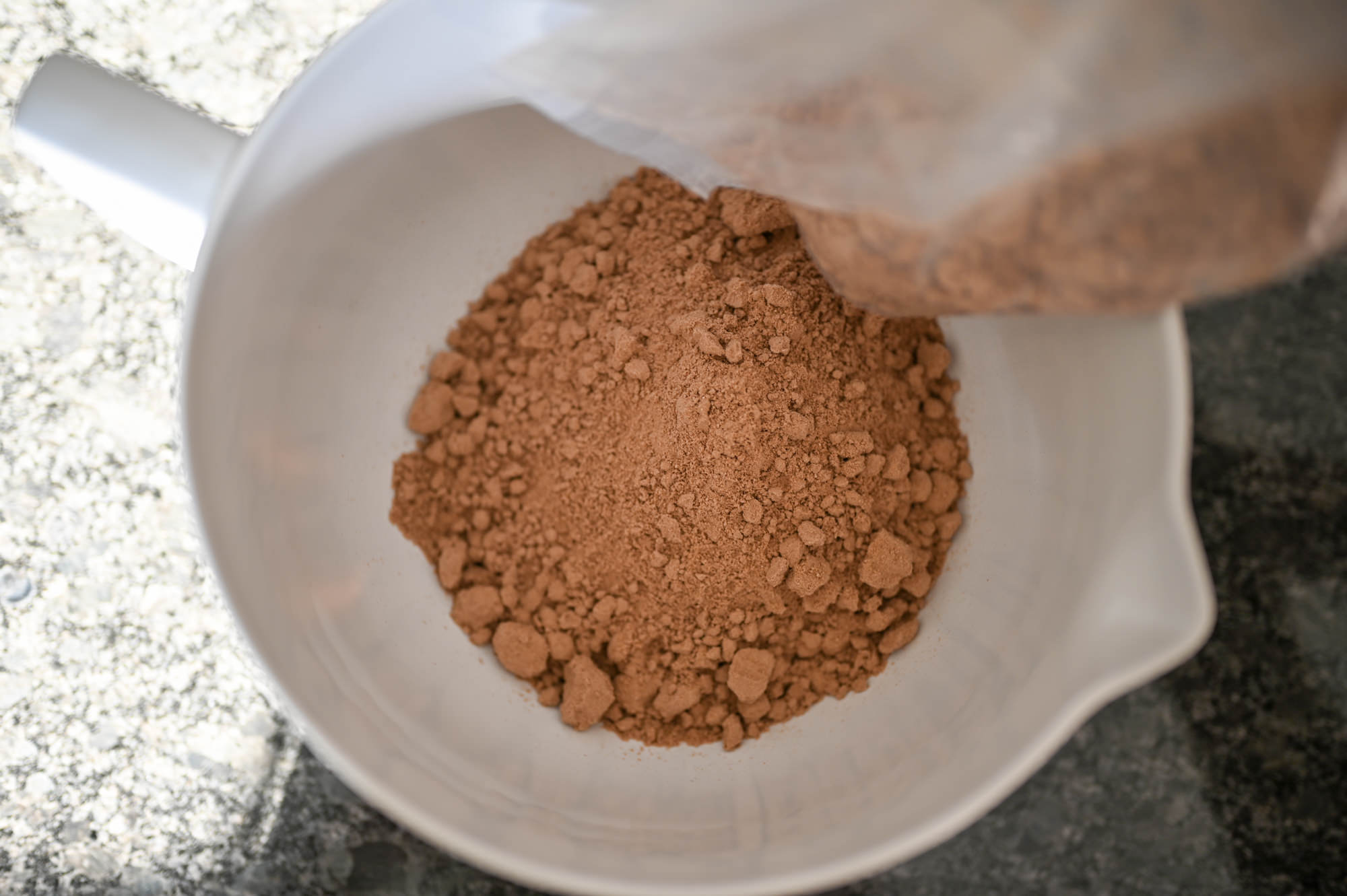 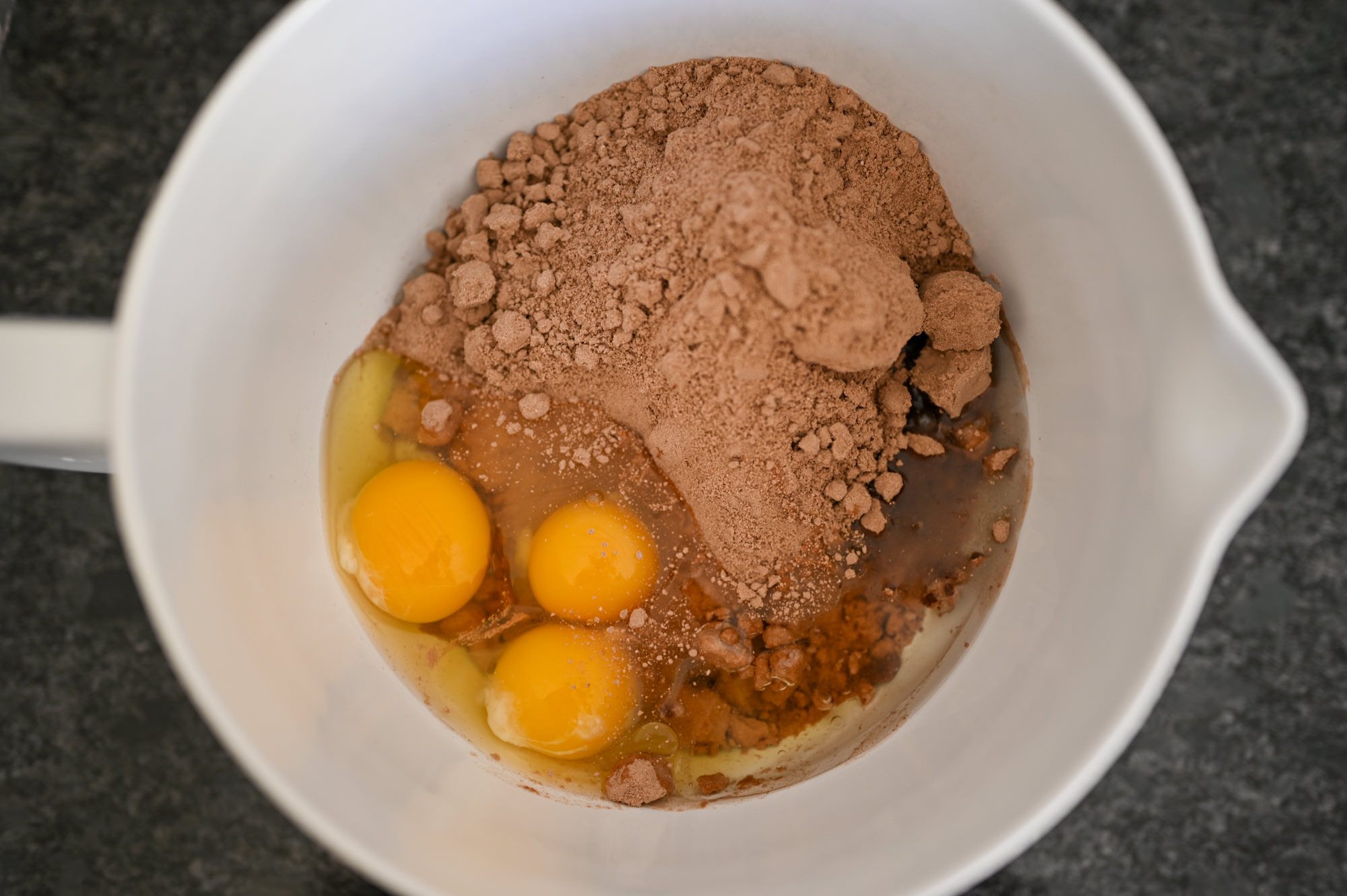 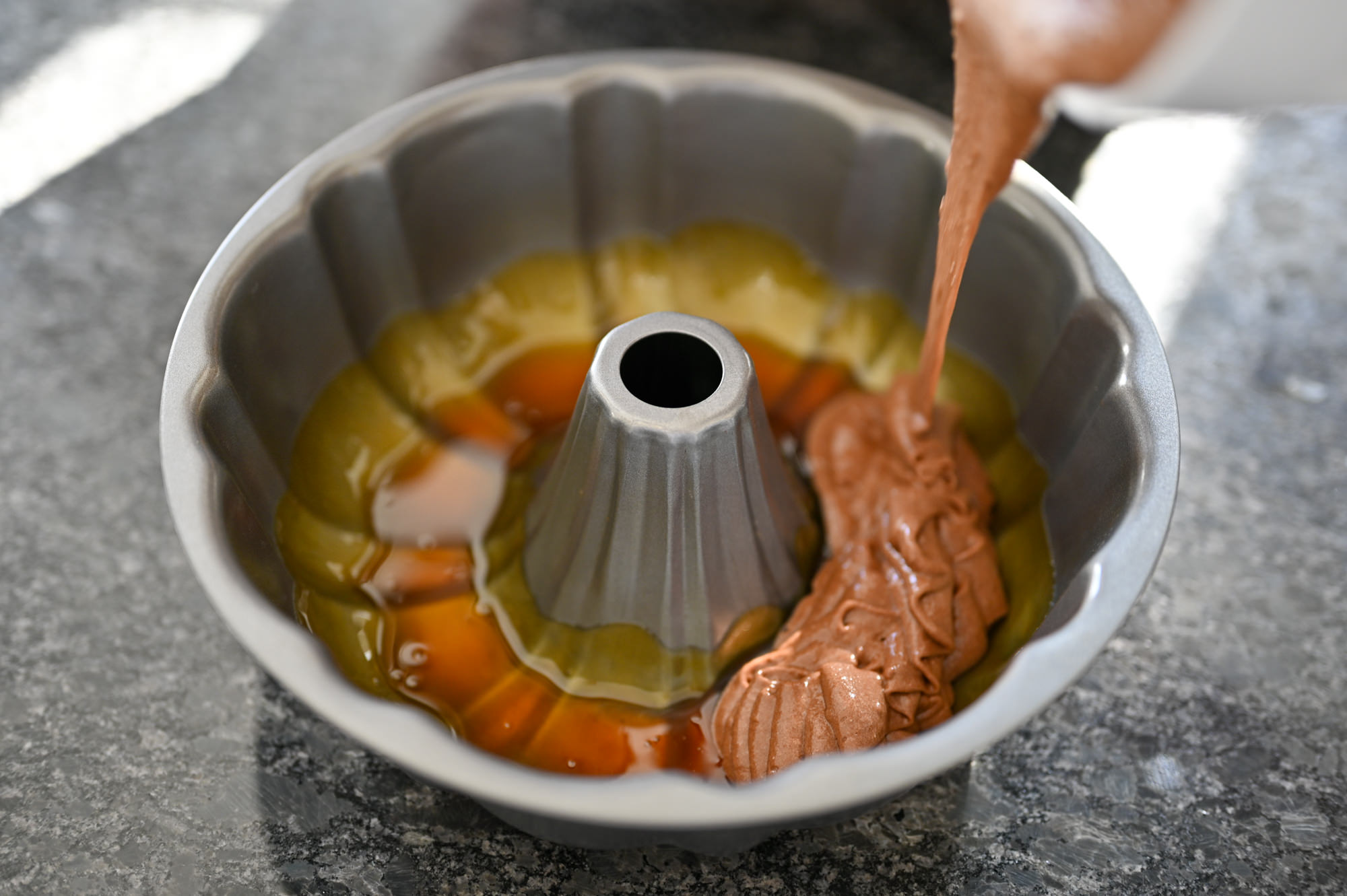 In another large mixing bowl, whisk the eggs and sugar together for about a minute.
Warm the milk until hot but, not boiling in a small saucepan or in the microwave.

Add the milk slowly while whisking to full incorporate it. Add the vanilla paste or extract and whisk thoroughly. 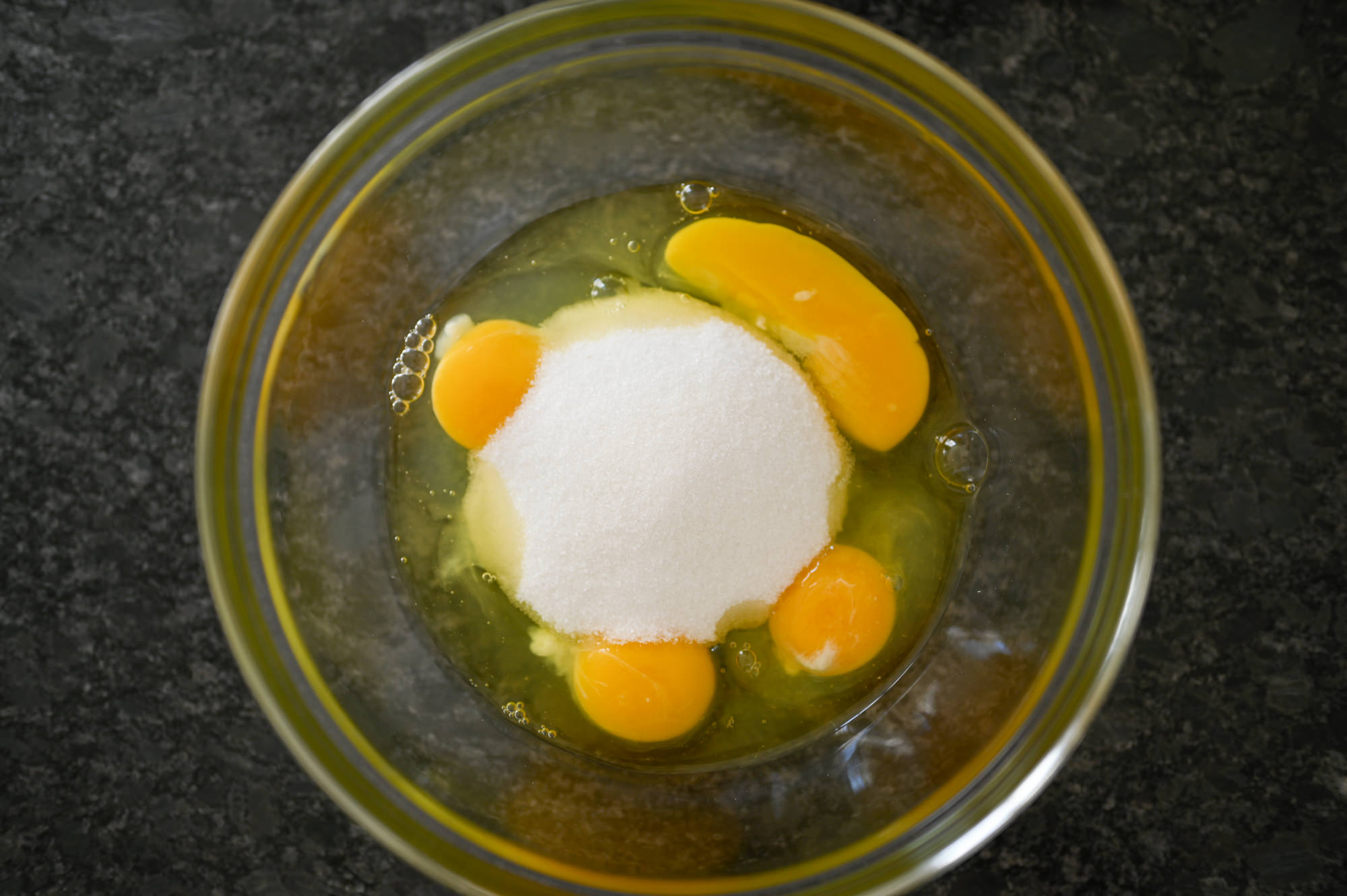 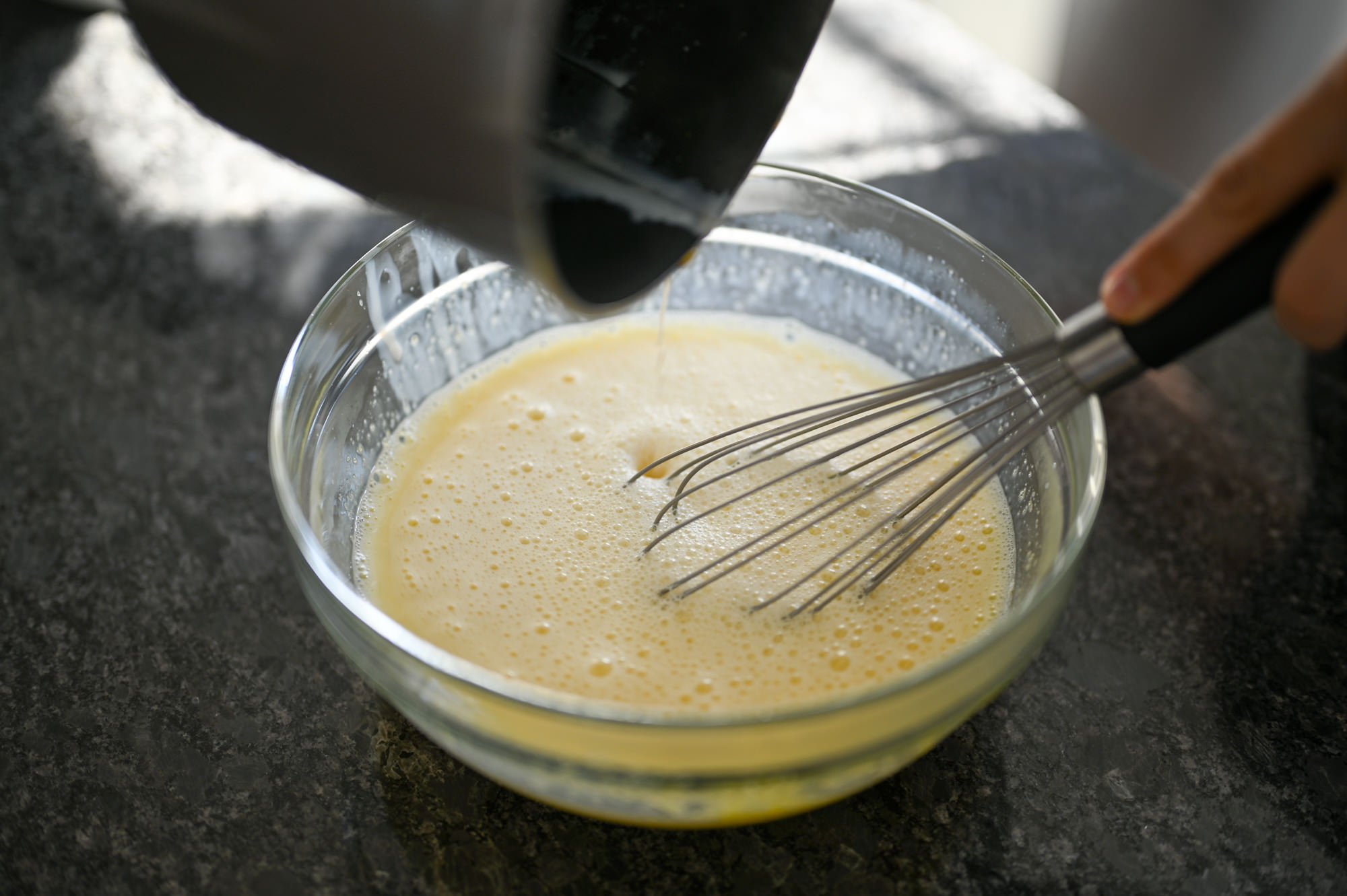 Pour the simmering water in the baking dish to create a water bath.
You want about 2-3 inches of water. 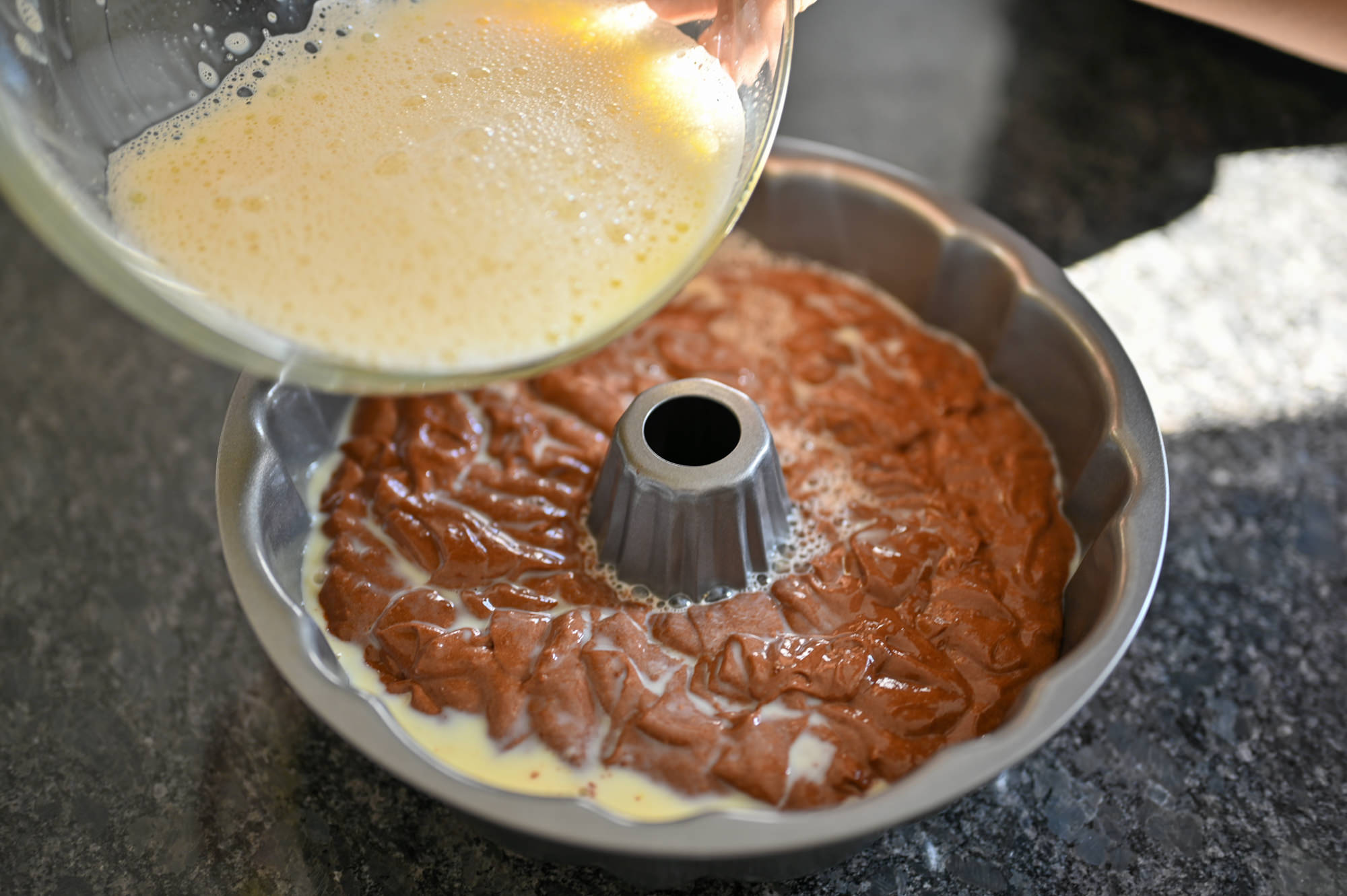 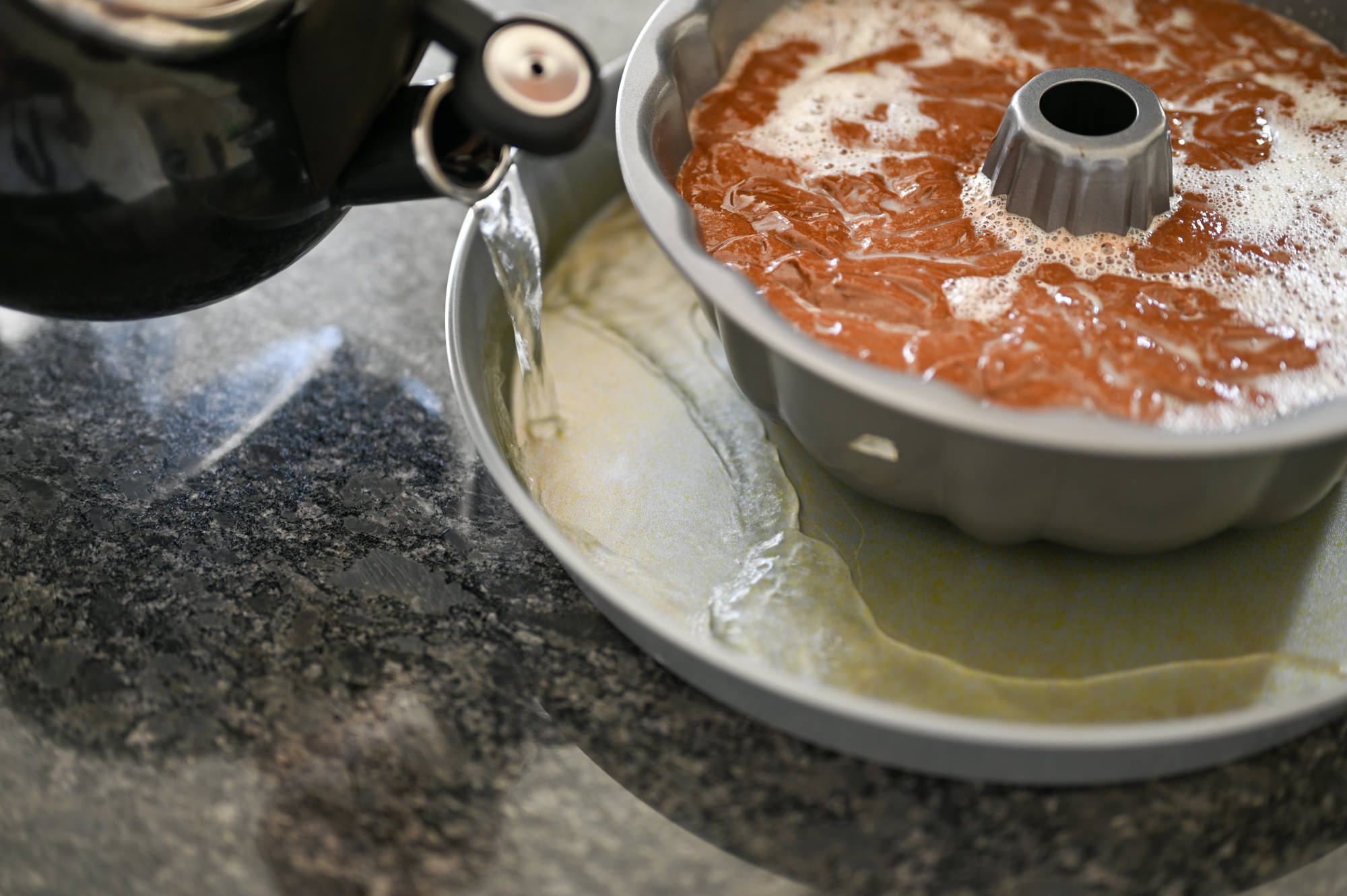 Bake for 50-60 minutes depending on your oven temperature. Cake will be done earlier but, using a knife, check the texture of the flan after about 45-50 minutes. Knife should come out clean. Flan should be firm when you jiggle it but not runny.

Let it cool at room temperature for about an hour.  Once it has cooled, cover with plastic wrap and refrigerate for at least 4 hours, preferably overnight. 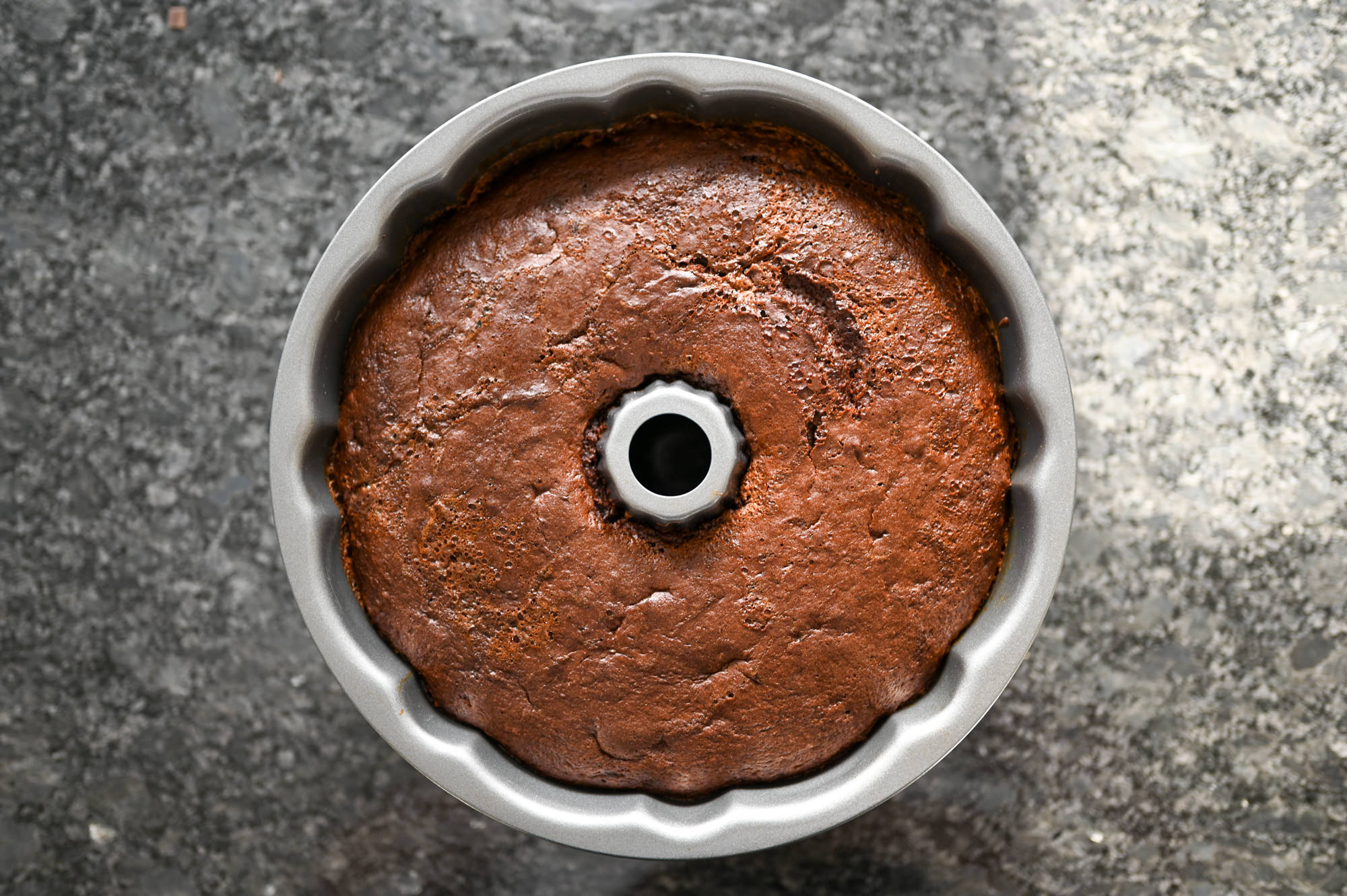 Run the blade of a knife around the Bundt sides and in the middle.  Place a large serving plate over the Bundt pan and invert into the plate.  Serve cold. 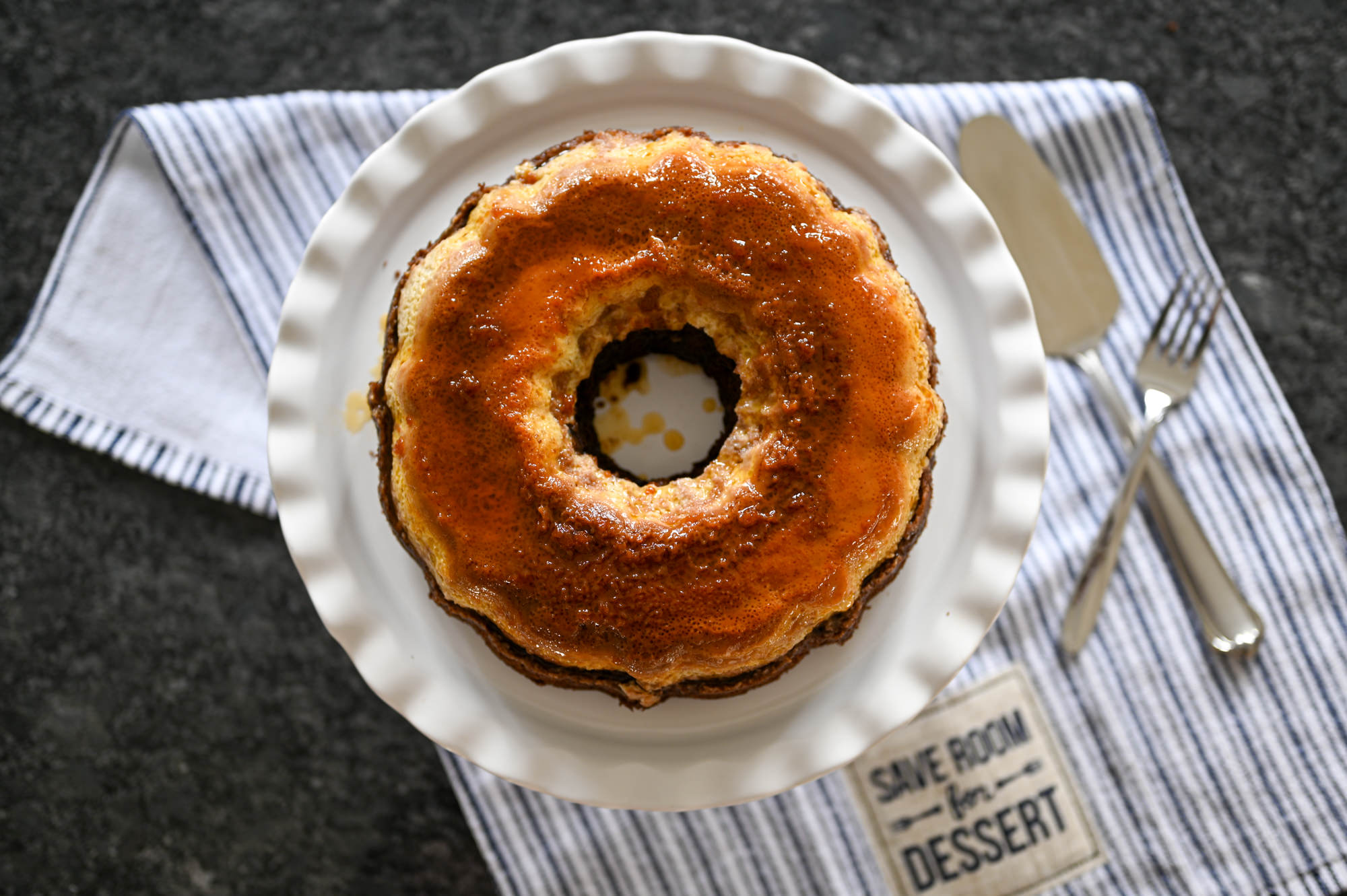 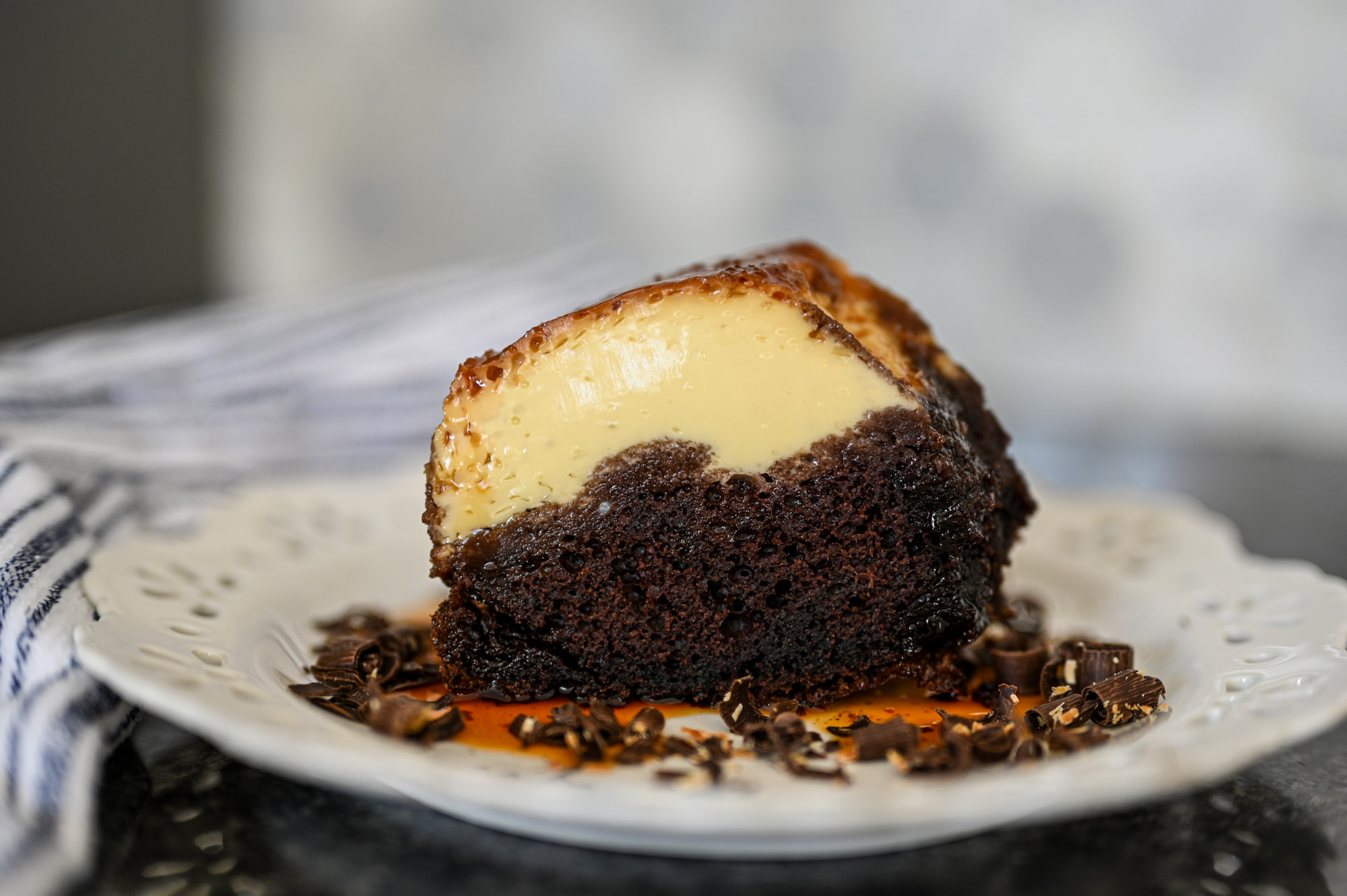 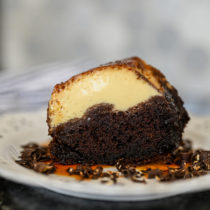