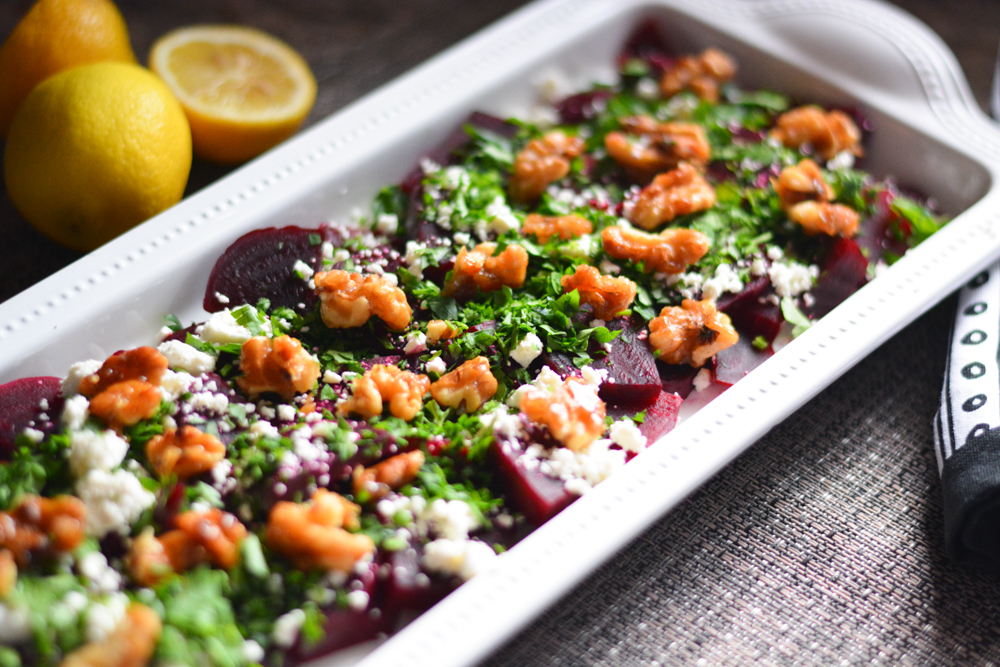 Beets sound like a pretty intense vegetable, but I promise you, try them in this salad recipe with tangy feta cheese, walnuts, & a light citrus vinaigrette.

I lived 23 years without ever trying beets, not that I can remember at least, until a few years ago. My mother-in-law makes them every now and then, especially when they are in season. She simply boils, slices and serves them as a healthy vegetable side. So, during Thanksgiving one year, I tried them and was so surprised at their mild yet sweet taste. They didn’t taste unpleasant as I always imagined they would, but they were not as life changing as some people make them out to be. While I may have felt somewhat indifferent about them, my husband loves beets, so when I saw them at the farmer’s market recently, I went off and bought a bunch. They have so much health benefits, I had to give them a try. Beets are known to have anti-cancer properties, they lower your blood pressure, give you energy, and are filled with nutrients and fiber.

I came home that day and googled how to cook beets. I found that you can either boil or roast them. I decided to try boiling, so I threw them in a large pot of boiling water, skin on. They were on the bigger side, so they took a little over an hour. Once they are fully boiled, you find that the skin peels off with very little effort. I cut the stems off and sliced them. I wanted to make them into a salad, since serving them alone sounded so boring. I know goat cheese is often paired with beets in a salad, but I didn’t have any in my fridge. However, I did have feta cheese so I substituted that, garnished with chopped parsley and made the iconic simple Lebanese vinaigrette of olive oil, lemon juice, salt, and crushed garlic. I drizzled that on top and served it. No lie, I was wowed by their taste in this recipe and so was my husband. Beets had officially won me over.

I made this salad a few more times, eventually adding candied walnuts as well. It has become such a hit in this house, I had to make it for you guys. I hope you love it as much as we do!

Boil the beets skin on, on medium-high heat for 45 minutes to 1 hour. They are ready once they be can easily pierced with a knife. 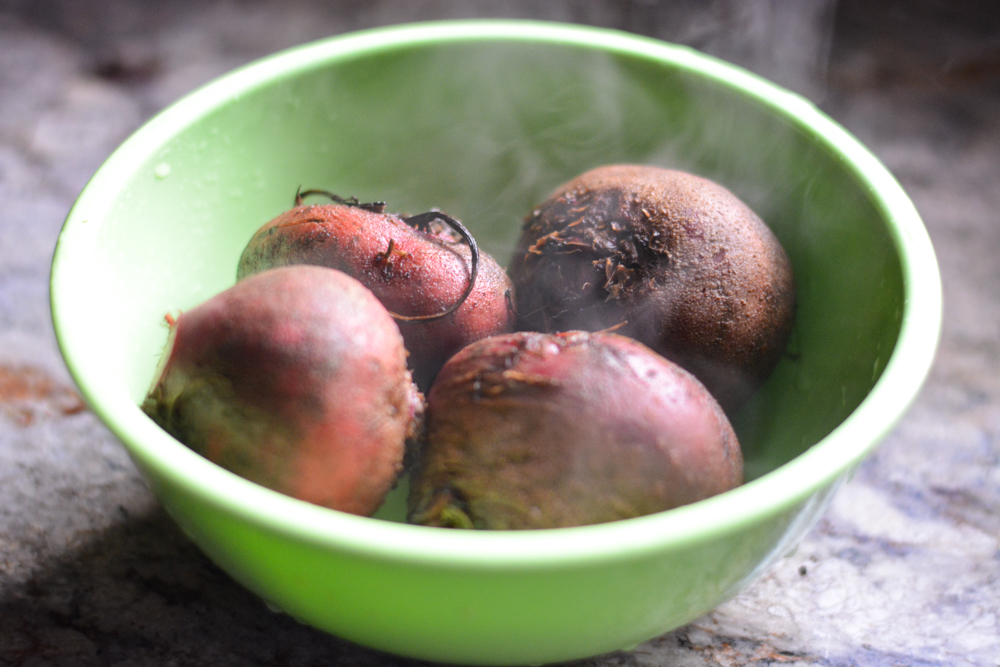 Once they have cooled, cut the stems off and peel the beets; the skin should easily come off. Slice the beets into thin ¼ inch slices. Place them in the serving dish. 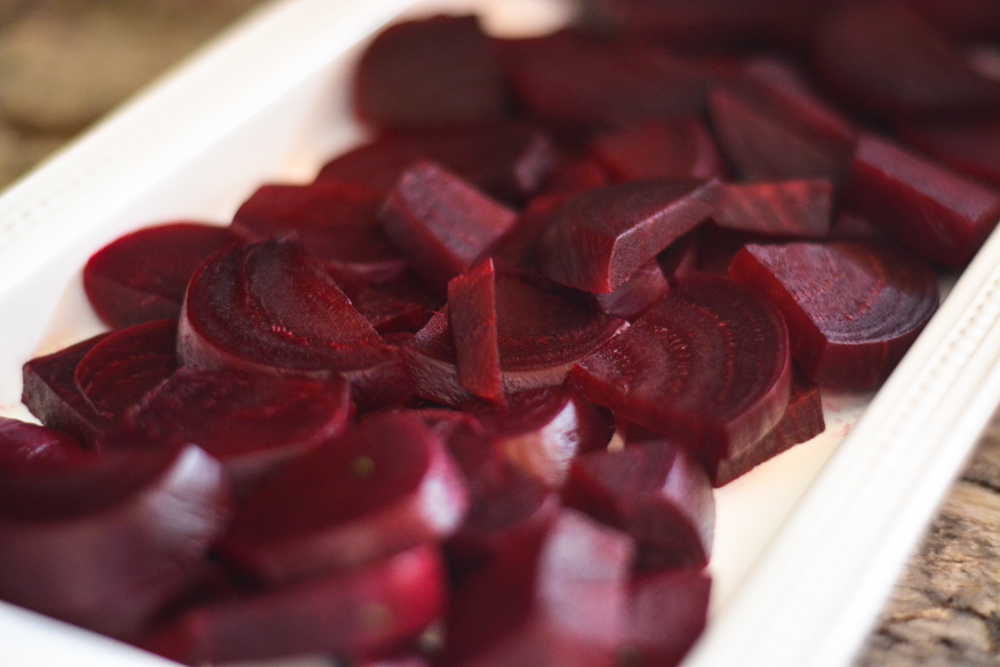 Crush the garlic for the vinaigrette and finely chop fresh parsley until you have ¼ cup.

In a non-stick pan, combine walnuts, butter and sugar.
Toss together until the butter has fully melted and the sugar has dissolved, about 5 minutes.

Empty the walnuts on to parchment paper and separate them so they don’t stick together once they dry. 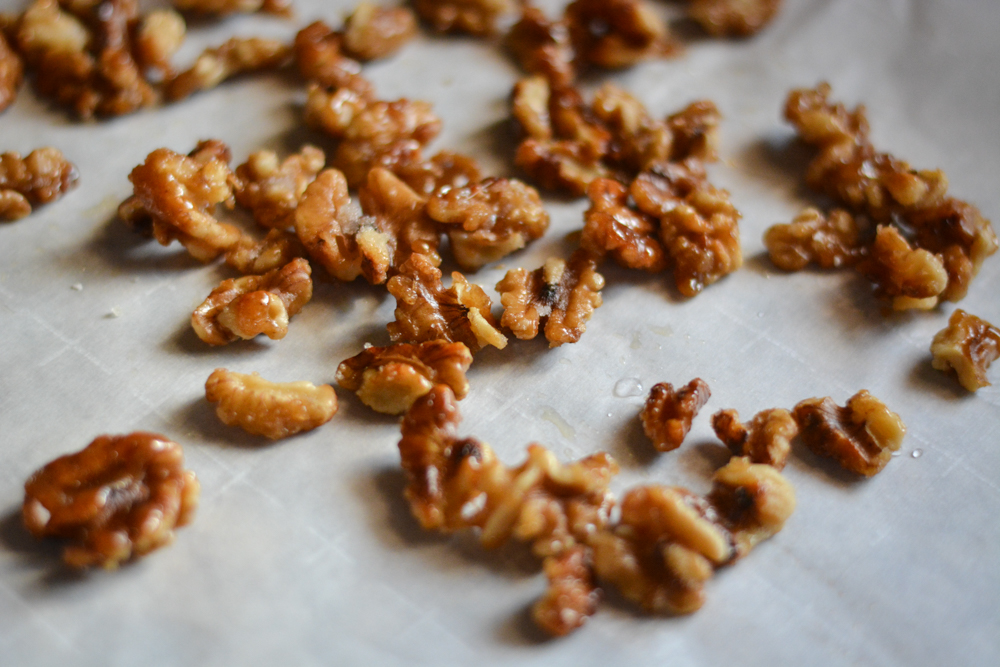 Sprinkle the feta cheese on top of the sliced beets. Top with chopped parsley and walnuts. 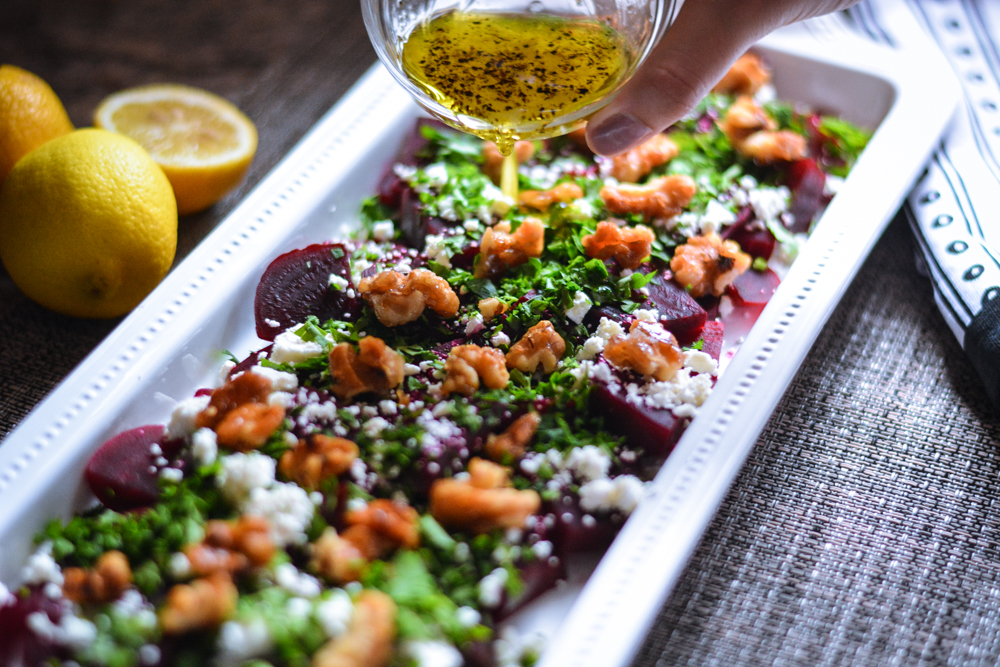 Drizzle the vinaigrette over the beet salad and serve. 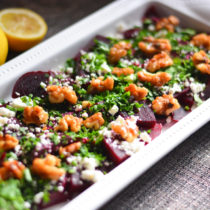